New Year's Eve
Probably the most famous tradition in the United States is the dropping of the New Year ball in Times Square, New York City, at 11:59 P.M. Thousands gather to watch the ball make its one-minute descent, arriving exactly at midnight. The tradition first began in 1907. The original ball was made of iron and wood; the current ball is made of Waterford Crystal, weighs 1,070 pounds, and is six feet in diameter.

A traditional southern New Year's dish is Hoppin' John-black eyed peas and ham hocks. An old saying goes, "Eat peas on New Year's day to have plenty of everything the rest of the year."

Another American tradition is the Rose Bowl in Pasadena, California. The Tournament of Roses parade that precedes the football game on New Year's day is made up of elaborate and inventive floats. The first parade was held in 1886.

Resolutions: It is believed that the Babylonians were the first to make New Year's resolutions, and people all over the world have been breaking them ever since. The early Christians believed the first day of the new year should be spent reflecting on past mistakes and resolving to improve oneself in the new year.

Fireworks: Noisemaking and fireworks on New Year's eve is believed to have originated in ancient times, when noise and fire were thought to dispel evil spirits and bring good luck. The Chinese are credited with inventing fireworks and use them to spectacular effect in their New Year's celebrations.

New Year's Day falls on January 1 and marks the start of a new year according to the Gregorian calendar. It marks the end of New Year's Eve celebrations in the United States and gives many Americans a chance to remember the previous year.

What do people do?

The start of New Year's Day, at midnight, is heralded by fireworks, parties and special events, which are often televised. Very few people have to work on the day itself. For many it is a day of recovery from the New Year's Eve celebrations the previous night. In some towns and cities, parades are held and special football games are played. The birth of the first baby in the New Year is often celebrated with gifts to his or her parents and appearances in local newspapers and on local news shows. Many people make New Year's resolutions. These are usually promises to themselves that they will improve something in their own lives. Common New Year's resolutions are to stop smoking or drinking alcohol, to lose weight, exercise more or to live a healthier lifestyle.

Government offices, organizations, schools and many businesses are closed in the USA on New Year's Day. Public transit systems do not run on their regular schedules. Where large public celebrations have been held, traffic may be disrupted by the clean-up operation. In general, public life is completely closed down.

The Gregorian calendar is widely used in many countries such as the United States. This was introduced in 1582 by Pope Gregory XIII. The Julian calendar that had been in use until then was slightly inaccurate, causing the vernal equinox to move backwards in the calendar year. The Gregorian calendar was not accepted everywhere and some churches, particularly with origins in Eastern Europe, still use other calendars. According to the Gregorian calendar, the first day of the year is January 1.

A common symbol of New Year's Day is Baby New Year. This is often a white male baby dressed in a diaper, a hat and a sash. The year he represents is printed on his sash. He rarely a newborn baby, as many pictures show him sitting up or even standing alone. According to mythology, Baby New Year grows up and ages in a single year. At the end of the year he is an old man and hands his role over to the next Baby New Year. Other symbols of New Year's Day are spectacular fireworks exploding over landmarks and clocks striking midnight as the year begins.
Posted by SemperFidelisNoah at 1:52 AM 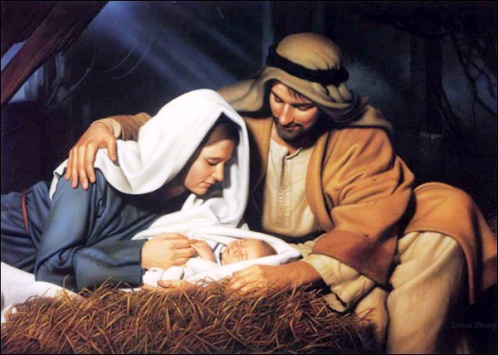 Merry Christmas
We all know the history behind Christmas Day. It is an annual Christian holiday celebrating the birth of God's son, Jesus Christ. Christmas wasn't always celebrated in this country; in fact, history shows that it was actually banned in some parts of the United States.

Between the years of 1659-1681, the Puritans in New England disapproved of the celebration of Christmas because they considered it a heathen holiday. The Puritans had gotten this idea from the English Parliament when they had forbidden Christmas to be celebrated in England. The reason for this was that the Bible mentions the Lord's day is the only day that should be considered holy. Meanwhile, states such as Virginia and New York went on celebrating.

In the year of 1850, Christmas trees started to be sold commercially in the United States. This started because images of the royal family of England with their Christmas tree were printed in English magazines in 1848. England had restored the celebration of Christmas in 1660 after one hundred years of reformation and Puritan restraint. This same print was then copied in the United States in 1850 because Queen Victoria was always copied for her fashion sense even in American society.

In more recent years, Christmas has become the subject of much controversy. Some people think that the making of Christmas as an official holiday violates separation of church and state. This issue has been brought to trial several times but in the end it has been ruled in the verdict for Ganulin v. United States (1999) that "the establishment of Christmas Day as a legal public holiday does not violate the Establishment Clause because it has a valid secular purpose."

From the beginning, Christmas was about sharing and giving to those we care about. Nowadays Christmas has become commercialized and has been debated about so often that the true meaning has been lost among the arguments. Whether Christmas is a secular holiday or a religious holiday to the people of the United States, the holiday season should still be looked upon as a time to celebrate with family and friends.
Posted by SemperFidelisNoah at 3:43 AM

NOAH: From age 17 through 19, I lost the best years of my life fighting the Japs as a member of the First Marine Division. Many of my buddies lost everything. The Japanese will always be Cowardly Japs to me.

Jap (????) is an English abbreviation of the word "Japanese." Today it is generally regarded as an ethnic slur among Japanese minority populations in other countries, although English-speaking countries differ in the degree to which they consider the term offensive. In the United States, Japanese Americans have come to find the term controversial or offensive, even when used as an abbreviation. In the past, Jap was not considered primarily offensive; however, during and after the events of World War II, the term became derogatory.

According to the Oxford English Dictionary  "Jap" as an abbreviation for "Japanese" was in colloquial use in London around 1880. An example of benign usage was the previous naming of Boondocks Road in Jefferson County, Texas, originally named "Jap Road" when it was built in 1905 to honor a popular local rice farmer from Japan.

Later popularized during World War II to describe those of Japanese descent, "Jap" was then commonly used in newspaper headlines to refer to the Japanese and Imperial Japan. "Jap" became a derogatory term during the war, more so than "Nip." Veteran and author Paul Fussell explains the usefulness of the word during the war for creating effective propaganda by saying that "Japs" "was a brisk monosyllable handy for slogans like 'Rap the Jap' or 'Let's Blast the Jap Clean Off the Map.'" Some in the United States Marine Corps tried to combine the word "Japs" with "apes" to create a new description, "Japes", for the Japanese; this neologism never became popular.

In the United States the term is now considered derogatory; the Merriam-Webster Online Dictionary notes it is "usually disparaging". A snack food company in Chicago named Japps Foods (for the company founder) changed their name and eponymous potato chip brand to Jays Foods shortly after Pearl Harbor to avoid any negative associations with the name.

In Texas, under pressure from civil rights groups, Jefferson County commissioners in 2004 decided to drop the name "Jap Road" from a 4.3-mile (6.9 km) road near the city of Beaumont. Also in adjacent Orange County, "Jap Lane" has also been targeted by civil rights groups. The road was originally named for the contributions of Kichimatsu Kishi and the farming colony he founded. And in Arizona, the state department of transportation renamed "Jap Road" near Topock, Arizona to "Bonzai Slough Road" to note the presence of Japanese agricultural workers and family-owned farms along the Colorado River there in the early 20th century.

In 2011, following the term's offhand use in a March 26 article appearing in The Spectator ("white-coated Jap bloke"), the Minister of the Japanese Embassy in London protested that "most Japanese people find the word "Jap" offensive, irrespective of the circumstances in which it is used." In Japan the word is not popularly known, used and referenced since Japanese are the majority of the population and there is no setting to create distinctions.
Posted by SemperFidelisNoah at 2:31 AM