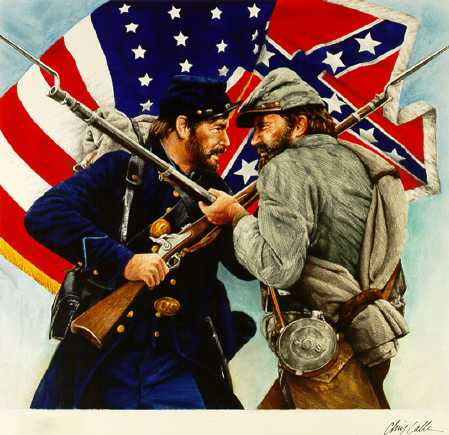 Tennessee in the American Civil War

At this EASTER, our minds are reflected back 150 years with the attack on Fort Sumter, which started the American Civil War. Many of the battles were fought in Tennessee near my place of birth. Just to name a couple; Shiloh, Columbia, Spring Hill, and Franklin.

To a large extent, the American Civil War was fought in cities and farms of Tennessee; only Virginia saw more battles. Tennessee was the last of the Southern states to declare secession from the Union, but saw more than its share of the devastation resulting from years of warring armies criss-crossing the state. Its rivers were key arteries to the Deep South, and, from the early days of the war, Union efforts focused on securing control of those transportation routes, as well as major roads and mountain passes such as the Cumberland Gap.

A large number of important battles occurred in Tennessee, including the vicious fighting at the Battle of Shiloh, which at the time, was the deadliest battle in American history (it was later surpassed by a number of other engagements). Other large battles in Tennessee included Stones River, Chattanooga, Nashville, and Franklin.

Although the state became a part of the Confederacy, pockets of strong pro-Union sentiments remained throughout the war, particularly in the mountains in East Tennessee. The Vice President of the United States, Andrew Johnson, was a loyalist, as were a number of congressmen and state politicians. On the Confederate side, significant leaders included noted cavalryman Nathan B. Forrest and corps commanders Leonidas Polk and Benjamin F. Cheatham, as well as Governor Isham Harris.

Secession
Pro-Union and anti-Republican sentiment before the attack on Fort Sumter
Initially, most Tennesseans showed little enthusiasm for breaking away from a nation whose struggles it had shared for so long. In 1860, they had voted by a slim margin for the Constitutional Unionist John Bell, a native son and moderate who continued to search for a way out of the crisis.

A vocal minority of Tennesseans spoke critically of the Northern states and the Lincoln presidency. "The people of the South are preparing for their next highest duty– resistance to coercion or invasion," wrote the Nashville Daily Gazette on January 5, 1861. The newspaper expressed the view that Florida, Georgia, and Alabama were exercising the highest right of all by taking control of all forts and other military establishments within the area– the right to self-defense. A pro-secessionist proposal was made in the Memphis Appeal to build a fort at Randolph, Tennessee, on the Mississippi River.

Governor Isham G. Harris convened an emergency session of the Tennessee General Assembly in January 1861. During his speech before the legislative body on January 7, he described the secession of the Southern states as a crisis caused by "long continued agitation of the slavery question" and "actual and threatened aggressions of the Northern States ... upon the well-defined constitutions rights of the Southern citizen." He also expressed alarm at the growth of the "purely sectional" Republican Party, which he stated was bound together by the "uncompromising hostility to the rights and institutions of the fifteen Southern states." He identified numerous grievances with the Republican Party, blaming them for inducing slaves to run off by means of the Underground Railroad, John Brown's raids, and high taxes on slave labor.

Harris agreed with the idea of popular sovereignty, that only the people within a state can determine whether or not slavery could exist within the boundaries of that state. Furthermore, he regarded laws passed by Congress that made U.S. territories non-slave states as taking territories away from the American people and making them solely for the North, territories from which "Southern men unable to live under a government which may by law recognize the free negro as his equal" were excluded. Governor Harris proposed holding a State Convention. A series of resolutions were presented in the Tennessee House of Representatives by William H. Wisener against the proposal. He declared passing any law reorganizing and arming the state militia to be inexpedient.

In Memphis, Unionists held two torchlight processions to honor their cause. The secessionists replied with their own demonstrations and a celebratory ball. That week, on February 9, the state of Tennessee was to vote on whether or not to send delegates to a State Convention that would decide on secession. The General Assembly convened by Governor Isham Harris did not believe it had the authority to call a State Convention without a vote of the people.

In February 1861, 54 percent of the state’s voters voted against sending delegates to a secession convention, defeating the proposal for a State Convention by a vote of 69,675 to 57,798. If a State Convention had been held, it would have been very heavily pro-Union. 88,803 votes were cast for Unionist candidates and 22,749 votes were cast for Secession candidates. That day the American flag was displayed in "every section of the city," with zeal equal to that which existed during the late 1860 presidential campaign, wrote the Nashville Daily Gazette. On the corner across from the newspaper office, a crowd had gathered around a bagpipe player playing Yankee Doodle, after which ex-mayor John Hugh Smith gave a speech that was received with loud cheers.

In a letter to Democratic senator Andrew Johnson, his servant C.O. Faxon surmised that the margin by which the No Convention vote won would have been even greater, had Union men not been afraid that if a State Convention were not called then, then Isham Harris would have again called for a State Convention when more state legislators were "infected with the secession epidemic." On March 7, the Memphis Daily Appeal wrote that the abolitionists were attempting to deprive the South of territories won during the U.S.-Mexican War. It pointed out that the slave states had furnished twice as many volunteers as the free states and territories, though it did not note that slave states were the ones who most supported the war.

On March 19, the editors of the Clarksville Chronicle endorsed a pro-Union candidate for state senator in Robertson, Montgomery, and Stewart counties.

On April 12, the Memphis Daily Appeal ran a satirical obituary for Uncle Sam, proclaiming him to have died of "irrepressible conflict disease," after having met Abraham Lincoln. One Robertson County slave owner complained that she could not rent her slaves out for "half [of what] they were worth" because "the negros think when Lincoln takes his last, they will all be free."

Historian Daniel Crofts thus reports:
Unionists of all descriptions, both those who became Confederates and those who did not, considered the proclamation calling for seventy-five thousand troops "disastrous." Having consulted personally with Lincoln in March, Congressman Horace Maynard, the unconditional Unionist and future Republican from East Tennessee, felt assured that the administration would pursue a peaceful policy. Soon after April 15, a dismayed Maynard reported that "the President's extraordinary proclamation" had unleashed "a tornado of excitement that seems likely to sweep us all away." Men who had "heretofore been cool, firm and Union loving" had become "perfectly wild" and were "aroused to a frenzy of passion." For what purpose, they asked, could such an army be wanted "but to invade, overrun and subjugate the Southern states." The growing war spirit in the North further convinced southerners that they would have to "fight for our hearthstones and the security of home."

Governor Isham Harris began military mobilization, submitted an ordinance of secession to the General Assembly, and made direct overtures to the Confederate government.

Tennessee secedes
In a June 8, 1861 referendum, East Tennessee held firm against separation, while West Tennessee returned an equally heavy majority in favor. The deciding vote came in Middle Tennessee, which went from 51 percent against secession in February to 88 percent in favor in June.

Having ratified by popular vote its connection with the fledgling Confederacy, Tennessee became the last state to formally withdraw from the Union.

People in East Tennessee, the only area of the state that did not practice slavery on a wide scale, continued to be firmly against Tennessee's move to leave the Union, as were many in other parts of the state, particularly in historically Whig portions of West Tennessee. Tennesseans representing twenty-six East Tennessee counties met twice in Greeneville and Knoxville and agreed to secede from Tennessee. They petitioned the state legislature in Nashville, which denied their request to secede and sent Confederate troops under Felix Zollicoffer to occupy East Tennessee and prevent secession. East Tennessee supplied significant numbers of troops to the Federal army, while the rest of Tennessee was a prime recruiting area for the Confederate army. Many East Tennesseans engaged in guerrilla warfare against state authorities by burning bridges, cutting telegraph wires, and spying for the North. East Tennessee became an early base for the Republican Party in the South.

Battles
Many battles were fought in the state, most of them victories by the larger Union forces.

Capture of Memphis and Nashville gave the Union control of the Western and Middle sections. Control was confirmed at the battle of Murfreesboro in early January 1863.

After Nashville was captured (the first Confederate state capital to fall) Andrew Johnson, an East Tennessean from Greeneville, was appointed military governor of the state by Lincoln. During this time, the military government abolished slavery (but with questionable legality).

The Confederates continued to hold East Tennessee despite the strength of Unionist sentiment there, with the exception of strongly pro-Confederate Sullivan and Rhea Counties.

1864
The last major battles came when the General John Bell Hood led the Confederates north in November 1864. He was checked at Franklin, and his army was virtually destroyed by George Thomas's greatly superior forces at Nashville in December.

Reconstruction
After the war, Tennessee adopted a constitutional amendment forbidding human property February 22, 1865; ratified the Fourteenth Amendment to the United States Constitution on July 18, 1866; and was the first state readmitted to the Union on July 24, 1866.

Because it ratified the Fourteenth Amendment, Tennessee was the only state that seceded from the Union that did not have a military governor during Reconstruction. This did not placate those unhappy with the Confederate defeat. Many white Tennesseans resisted efforts to expand suffrage and other civil rights to the freedmen. For generations white Tennesseans had been raised to believed that slavery was justified. Some could not accept that their former slaves were now equal under the law.

When the state Supreme Court upheld the constitutionality of African American suffrage in 1867, the reaction became stronger. The Nashville Republican Banner on January 4, 1868, published an editorial calling for a revolutionary movement of white Southerners to unseat the one-party state rule imposed by the Republican Party and restore the legal inferiority of the region's black population.

"In this State, reconstruction has perfected itself and done its worst. It has organized a government which is as complete a closed corporation as may be found; it has placed the black man over the white as the agent and prime-move of domination; it has constructed a system of machinery by which all free guarantees, privileges and opportunities are removed from the people.... The impossibility of casting a free vote in Tennessee short of a revolutionary movement ... is an undoubted fact."

The Banner urged its readers to ignore the presidential election and direct their energy into building "a local movement here at home" to end Republican rule.

According to the 1860 census, African Americans comprised only 25 percent of Tennessee's population, which meant they could not dominate politics. Only a few African Americans served in the Tennessee legislature during Reconstruction, and not many more as state and city officers. However, the Nashville Banner may have been reacting to increased participation by African Americans on that city's council, where they held about one-third of the seats.
Posted by SemperFidelisNoah at 9:15 AM