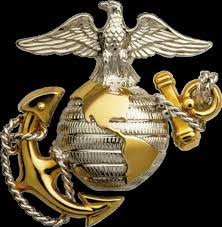 Eagle, Globe, and Anchor
(Noah's comment: When I joined the Marine Corps in the early '40s, we could not wear the emblem until we successfully graduated from boot-camp. We were not called Marine until we earned the emblem. The DI called us other things while in boot-camp, but not Marine. The commissioned officers are also happy to be referred to as Marine.)

The Eagle, Globe, and Anchor is the official emblem of the United States Marine Corps. The current emblem traces its roots in the designs and ornaments of the early Continental Marines as well as the British Royal Marines. The present emblem, adopted in 1966, differs only by a change in the eagle from the emblem of 1868. Before that time many devices, ornaments, and distinguishing marks followed one another as official badges of the Corps.

History
In 1776, the device consisted of a "fouled anchor" of silver or pewter. (A fouled anchor is an anchor which has one or more turns of the chain around it). The fouled anchor still forms a part of the emblem today. Changes were made in 1798, 1821, and 1824. In 1834, it was prescribed that a brass eagle be worn on the hat, the eagle to measure 3 ½ inches from wingtip to wingtip. This early insignia is found on the buttons of Marine dress and service uniforms today.

During the early years numerous distinguishing marks were prescribed, including "black cockades," "scarlet plumes," and "yellow bands and tassels." In 1859 the origin of the present color scheme for the officer's dress uniform ornaments appeared on an elaborate device of solid white metal and yellow metal. The design included a United States shield, half wreath, a bugle, and the letter "M."

In 1868, the Commandant of the Marine Corps, Brigadier General Jacob Zeilin appointed a board "to decide and report upon the various devices of cap ornaments of the Marine Corps." On November 13, 1868, the board turned in its report. It was approved by the Commandant four days later, and was signed by the Secretary of the Navy on November 19, 1868.
Design and symbolism
The emblem recommended by the 1868 board consisted of a globe (showing the Western Hemisphere) intersected by a fouled anchor, and surmounted by a spread eagle. On the emblem itself, the device is topped by a ribbon inscribed with the Latin motto "Semper Fidelis (Always Faithful). The uniform ornaments omit the motto ribbon.
The general design of the emblem was probably derived from the Royal Marines' "Globe and Laurel." The globe on the U.S. Marine emblem signifies continuing historical service in any part of the world. The eagle represents the nation of the United States. The anchor, whose origin dates back to the founding of the Marine Corps in 1775, acknowledges the naval tradition of the United States Marines and their continual service under the command of the Department of the Navy.
The Eagle, Globe, and Anchor can also symbolize the three elements in which the Marines operate; they are the only service that frequently see action in land, sea, and air. For example, the Army and Air Force may see action in the air and on the ground, but not the sea, with the Navy seeing action in the air and at sea, but not normally on ground.
There are slight differences between the enlisted and officer's emblem. The enlisted emblem is entirely gold, while the officer's emblem incorporates silver and gold. The officer's emblem is also marginally larger than the enlisted's emblem with the anchor's chain positioned differently than on the enlisted's emblem. Finally, Cuba is not present on the officer's emblem, since commissioned officers were not present during that particular campaign.
Posted by SemperFidelisNoah at 12:19 PM