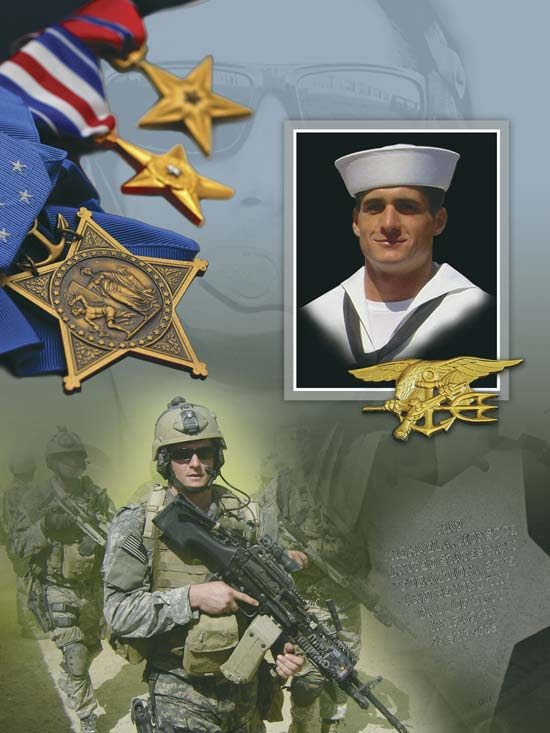 Michael A. Monsoor, Petty Officer - U.S. Navy SEAL
Michael Anthony Monsoor (April 5, 1981 – September 29, 2006) was a U.S. Navy SEAL killed during the Iraq War and posthumously awarded the Medal of Honor. Monsoor enlisted in the United States Navy in 2001 and graduated from Basic Underwater Demolition/SEAL training in 2004. After further training he was assigned to Delta Platoon, SEAL Team Three.

Delta Platoon was sent to Iraq in April 2006 and assigned to train Iraqi Army soldiers in Ramadi. Over the next five months, Monsoor and his platoon frequently engaged in combat with insurgent forces. On September 29, 2006 an insurgent threw a grenade onto a rooftop where Monsoor and several other SEAL and Iraqi soldiers were positioned. Monsoor quickly smothered the grenade with his body, absorbing the resulting explosion and most likely saving his comrades from serious injury or death. Monsoor died 30 minutes later from serious wounds caused by the grenade explosion.
On March 31, 2008, the United States Department of Defense confirmed that Michael Monsoor would posthumously receive the Medal of Honor from the President of the United States, George W. Bush. Bush presented the medal to Monsoor's parents on April 8, 2008. In October 2008, United States Secretary of the Navy Donald C. Winter announced that DDG-1001, the second ship in the Zumwalt class of destroyers, would be named Michael Monsoorn in honor of Monsoor.

Early life and military service
Michael was the third of four children born to a Marine father in Long Beach, California. Afflicted with asthma as a child, Monsoor strengthened his lungs by racing his siblings in the family's swimming pool. Monsoor attended Garden Grove High School in Garden Grove, California. He played tight-end on the school's football team and graduated in 1999.
Monsoor enlisted in the United States Navy on March 21, 2001, and attended Basic Training at Recruit Training Command, Great Lakes, Illinois. Upon graduation from basic training, he attended Quartermaster "A" School, and then transferred to Naval Air Station, Sigonella, Italy for a short period of time. He entered Basic Underwater Demolition/SEAL training but had to drop out because of an injury. He later reentered and graduated from Class 250 on September 2, 2004 as one of the top performers in his class. After BUD/S, he completed advanced SEAL training courses including parachute training at Basic Airborne School, cold weather combat training in Kodiak, Alaska, and six months of SEAL Qualification Training in Coronado, California graduating in March 2005. The following month, his rating changed from Quartermaster to Master-at-Arms, and he was assigned to Delta Platoon, SEAL Team Three.

Iraq deployment
SEAL Team Three was sent to Ramadi, Iraq in April 2006 and assigned to train Iraqi Army soldiers. As a communicator and machine-gunner on patrols, Monsoor carried 100 pounds of gear in temperatures often exceeding 100 degrees. He took a lead position to protect the platoon from frontal assault. The team was involved in frequent engagements with insurgent fighters. During the first five months of deployment, the team reportedly killed 84 insurgents.
During an engagement on May 9, 2006, Monsoor ran into a street while under continuous insurgent gunfire to rescue an injured comrade. Monsoor was awarded the Silver Star for this action. He was also awarded the Bronze Star for his service in Iraq.

Death
On September 29, 2006, Monsoor's platoon engaged four insurgents in a firefight, killing one and injuring another. Anticipating further attacks, Monsoor, three SEAL snipers and three Iraqi Army soldiers took up a rooftop position. Civilians aiding the insurgents blocked off the streets, and a nearby mosque broadcast a message for people to fight against the Americans and the Iraqi soldiers. Monsoor was protecting other SEALs, two of whom were 15 feet away from him. Monsoor's position made him the only SEAL on the rooftop with quick access to an escape route.
A grenade was thrown onto the rooftop by an insurgent on the street below. The grenade hit Monsoor in the chest and fell onto the floor. Immediately, Monsoor yelled "Grenade!" and jumped onto the grenade, covering it with his body. The grenade exploded seconds later and Monsoor's body absorbed most of the force of the blast, likely saving the lives of three other people. Monsoor was severely wounded and although evacuated immediately, he died 30 minutes later. Two other SEALs next to him at the time were injured by the explosion but survived.

Honors
Monsoor was described as a "quiet professional" and a "fun-loving guy" by those who knew him. He is buried at Fort Rosecrans National Cemetery in San Diego.
During Monsoor's funeral, as his coffin was being moved from the hearse to the grave site, Navy SEALs were lined up on both sides of the pallbearers route forming a column of two's, with the coffin moving up the center. As Monsoor's coffin passed, each SEAL, having removed his gold Trident from his own uniform, slapped it down deeply embedding the Trident in Monsoor's wooden coffin. The slaps were audible from across the cemetery. By the time the coffin arrived at grave side, it looked as though it had a gold inlay from all the SEAL badges pinned onto it.
The symbolic display moved many, including U.S. President George W. Bush, who spoke about the incident during a speech.
"The procession went on nearly half an hour," Bush said. "And when it was all over, the simple wooden coffin had become a gold-plated memorial to a hero who will never be forgotten.
On March 31, 2008, the United States Department of Defense confirmed that Michael Monsoor would posthumously receive the Medal of Honor from the President of the United States, George W. Bush. Monsoor's parents George and Sally Monsoor, received the medal on his behalf at an April 8, ceremony at the White House held by the President. Monsoor became the fourth American servicemember and second Navy SEAL — each killed in the line of duty — to receive the United States' highest military award during the War on Terrorism.
In October 2008, United States Secretary of the Navy Donald C. Winter announced that DDG-1001, the second ship in the Zumwalt class of destroyers, would be named Michael Monsoor in honor of Petty Officer Monsoor.

Medal of Honor citation
The President of the United States in the name of The Congress takes pride in presenting the MEDAL OF HONOR posthumously to
MASTER AT ARMS SECOND CLASS, SEA, AIR and LAND MICHAEL A. MONSOOR UNITED STATES NAVY
For service as set forth in the following CITATION:
For conspicuous gallantry and intrepidity at the risk of his life above and beyond the call of duty while serving as Automatic Weapons Gunner for Naval Special Warfare Task Group Arabian Peninsula, in support of Operation IRAQI FREEDOM on 29 September 2006.As a member of a combined SEAL and Iraqi Army sniper overwatch element, tasked with providing early warning and stand-off protection from a rooftop in an insurgent-held sector of Ar Ramadi, Iraq, Petty Officer Monsoor distinguished himself by his exceptional bravery in the face of grave danger. In the early morning, insurgents prepared to execute a coordinated attack by reconnoitering the area around the element's position. Element snipers thwarted the enemy's initial attempt by eliminating two insurgents. The enemy continued to assault the element, engaging them with a rocket-propelled grenade and small arms fire. As enemy activity increased, Petty Officer Monsoor took position with his machine gun between two teammates on an outcropping of the roof. While the SEALs vigilantly watched for enemy activity, an insurgent threw a hand grenade from an unseen location, which bounced off Petty Officer Monsoor's chest and landed in front of him. Although only he could have escaped the blast, Petty Officer Monsoor chose instead to protect his teammates. Instantly and without regard for his own safety, he threw himself onto the grenade to absorb the force of the explosion with his body, saving the lives of his two teammates. By his undaunted courage, fighting spirit, and unwavering devotion to duty in the face of certain death, Petty Officer Monsoor gallantly gave his life for his country, thereby reflecting great credit upon himself and upholding the highest traditions of the United States Naval Service.
Posted by SemperFidelisNoah at 11:31 AM