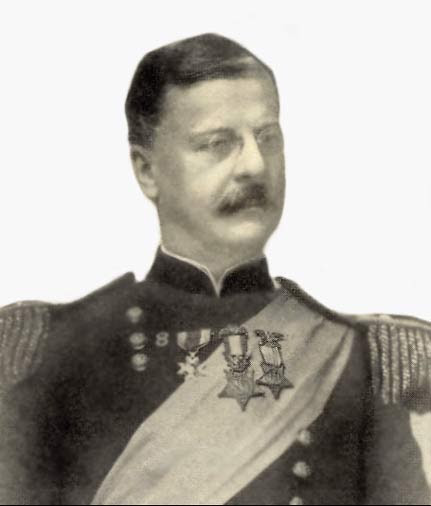 Arthur MacArthur, Jr.
Lieutenant General Arthur MacArthur, Jr. (June 2, 1845 - September 5, 1912), was a United States Army General. He became the military governor of the American-occupied Philippines in 1900 but his term ended a year later due to clashes with the civilian governor, future President William Howard Taft. His son, Douglas MacArthur, also became a general in the Army, one of only five men elevated to General of the Army a five-star rank.

Just over four decades later, his son, Douglas MacArthur, would also gain fame for leading U.S forces to victory in the Philippines. Arthur MacArthur, Jr. and Douglas MacArthur were the first father and son ever to each be awarded a Medal of Honor. To date, the only other father and son to be given this honor (but both awarded posthumously) are former President Theodore Roosevelt and his son, Theodore Roosevelt, Jr.

Early life
Born in Chicopee Falls, then part of Springfield, Massachusetts, MacArthur was the father of the famed general Douglas MacArthur, as well as Arthur MacArthur III, a captain in the Navy awarded the Navy Cross in World War I. His own father, Arthur MacArthur, Sr., was the fourth governor of Wisconsin (albeit for only four days) and a popular judge in Milwaukee.

Civil War
At the outbreak of the Civil War, he was living in Wisconsin and immediately joined the 24th Wisconsin Volunteer Infantry, seeing action at Chickamauga, Stones River, Chattanooga, the Atlanta Campaign and Franklin. For his Civil War exploits he earned the Medal of Honor for his performance at Missionary Ridge and was brevetted colonel in the Army at the age of 19. His soldiers loved him so much that he became nationally recognized as "The Boy Colonel". MacArthur was recommended for the Medal of Honor for electrifying his regiment at Missionary Ridge during the Battle of Chattanooga in 1863, with the cry "On Wisconsin." He was awarded the Medal in 1890 for that service.
MacArthur left the Army in June 1865 and began the study of law, but it was not for him and he returned to his first love, the Army, on February 23, 1866, receiving a commission as a Second Lieutenant in the Regular Army's U.S. 17th Infantry Regiment, with a promotion the following day to First Lieutenant. He was promoted in September of that year to Captain, due to his Civil War record; however he would remain a Captain for the following two decades, as promotion was slow in the small peacetime army.

Indian Wars
For thirty years, Captain MacArthur traveled the nation, being assigned to Pennsylvania, New York, Utah Territory, Louisiana and New Mexico. In 1884, MacArthur became the post commander of Fort Selden. In 1885, he took part in the campaign against Geronimo. In 1889, he was promoted to Assistant Adjutant General of the Army with the rank of major, and was promoted to Lieutenant Colonel in 1897.

Spanish-American War
During the first part of the Spanish American War, MacArthur was serving as the adjutant general of the III Corps in Georgia. In June, 1898 he was promoted to a temporary Brigadier General in the volunteer army and commanded the Third Philippine Expedition. When he arrived in the Philippines he took command of the 1st Brigade, 2nd Division, VIII Corps and led it at the Battle of Manila (1898). He was appointed Major General of volunteers when the Spanish-American War ended.

Philippine-American War
MacArthur was stationed in the Dakota Territory when the Spanish-American War broke out in 1898 and was commissioned a Brigadier General of U.S. Volunteers. He led the U.S. 2nd Division, VIII Corps during the Philippine-American War at the Battle of Manila (1899), the Malolos campaign and the Northern Offensive. When the American occupation of the Philippines turned from conventional battles to guerrilla warfare, MacArthur commanded the Department of Northern Luzon. In January 1900, he was appointed Brigadier General in the regular army and was appointed military governor of the Philippines and assumed command of the VIII Corps, replacing General Elwell S. Otis.
He authorised the expedition, under General Frederick Funston, that resulted in the capture of Emilio Aguinaldo. MacArthur persuaded the captured Aguinaldo to cease fighting and to swear allegiance to the United States. He was promoted to Major General in 1902.
After the war, President William McKinley named him Military Governor of the Philippines, but the following year, William Howard Taft was appointed as Civilian Governor. Taft and MacArthur clashed frequently. So severe were his difficulties with Taft over U.S. military actions in the war that MacArthur was eventually relieved and transferred to command the Department of the Pacific, where he was promoted to Lieutenant General.

Return to the United States
In the years that followed, he was assigned to various stateside posts and in 1905 was sent to Manchuria to observe the final stages of the Russo-Japanese War and served as military attachй to the U.S. Embassy in Tokyo. He returned to the U.S. in 1906 and resumed his post as Commander of the Pacific Division. That year the position of Army Chief of Staff became available and he was then the highest ranking officer in the Army as a lieutenant general (three stars). However, he was passed over by Secretary of War William Howard Taft. He never did realize his dream of commanding the entire Army.

Retirement
MacArthur retired from the Army on June 2, 1909, the day that he turned 64. On September 5, 1912, he went to Milwaukee to address a reunion of his Civil War unit. While on the dais, he suffered a massive heart attack and died there, aged 67. He was originally buried in Milwaukee on Monday, September 7, 1912, but was moved to Section 2 of Arlington National Cemetery in 1926. He is buried among other members of the family there, while his son, Douglas chose to be buried in Norfolk, Virginia.

Medal of Honor citation
Rank and Organization:
First Lieutenant, and Adjutant, 24th Wisconsin Infantry. Place and date: At Missionary Ridge, Tenn., November 25, 1863. Entered service at: Milwaukee, Wis. Birth: Springfield, Mass. Date of issue: June 30, 1890.
Citation:
Seized the colors of his regiment at a critical moment and planted them on the captured works on the crest of Missionary Ridge.
Just over four decades later, his son, Douglas MacArthur, would also gain fame for leading U.S forces to victory in the Philippines. Arthur MacArthur, Jr. and Douglas MacArthur were the first father and son ever to each be awarded a Medal of Honor. To date, the only other father and son to be given this honor (but both awarded posthumously) are former President Theodore Roosevelt and his son, Theodore Roosevelt, Jr.
Posted by SemperFidelisNoah at 8:25 AM