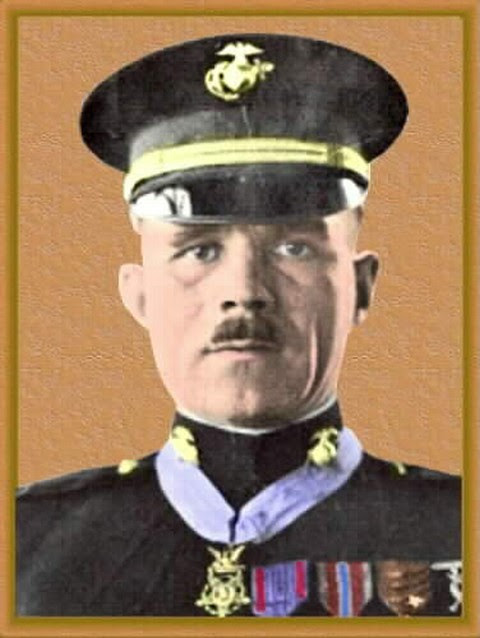 Louis Cukela
United States Marine
Louis Cukela (Croatian: Luj Čukela, pronounced "chukela") (May 1, 1888 – March 19, 1956) was a United States Marine who was awarded the Medal of Honor by both the U.S. Army and the U.S. Navy for the same action during the World War I Battle of Soissons. He was also awarded decorations from France, Italy, and his native Yugoslavia.

Biography
Louis Cukela, an ethnic Croat, was born in Split, Croatia (then Austria-Hungary). He was educated in the grade schools of Split, then attended the Merchant Academy and later, the Royal Gymnasium, both for two year courses. In 1913, Cukela immigrated to the United States and he and his brother settled in Minneapolis, Minnesota.

On September 21, 1914, he enlisted in the United States Army. He was serving as a corporal in Company H, 13th Infantry when he was honorably discharged on June 12, 1916.

World War I
Seven months later, on January 31, 1917, with war raging in Europe and prior to the United States entry into the war, Cukela enlisted in the United States Marine Corps. He became a member of the 66th Company, 1st Battalion, Fifth Marine Regiment.
He was deployed to France in 1918 and fought in all the engagements in which the 5th Marines participated, from Belleau Wood to the Meuse River Crossing.
In France in 1918, Cukela fought in every battle of the Marine Brigade, from Belleau Wood to the Meuse River Crossing. Along the way he collected a commission as a second lieutenant, as well as the Medal of Honor and four Silver Star Citations. From the French, there was the Legion d’Honneur, the Medaille Militaire (the first award of this prestigious decoration to a Marine officer) and the Croix de Guerre 1914-18 with two palms and one silver star. Italy decorated him with the Croce al Merito di Guerra, while Yugoslavia weighed in with the Commander’s Cross of the Royal Order of the Crown of Yugoslavia.
He was awarded the Medal of Honor by both the Army and the Navy for the same action on the morning of July 18, 1918, near Villers-Cotterets, France, during the Soissons engagement. The 66th Company, 5th Marines, in which Cukela was then a gunnery sergeant, was advancing through the Forest de Retz when it was held up by an enemy strong point. Despite the warnings of his men, the gunnery sergeant crawled out from the flank and advanced alone towards the German lines. Getting beyond the strong point despite heavy fire, "Gunny" Cukela captured one gun by bayoneting its crew. Picking up their hand grenades, he then demolished the remaining portion of the strong point from the shelter of a nearby gun pit. He took four prisoners and captured two undamaged machine guns.
Cukela was wounded in action twice but since there is no record of either wound at the Navy's Bureau of Medicine and Surgery, he was never awarded the Purple Heart. The first wound was suffered at Jaulny, France, on September 16, 1918 during the St. Mihiel engagement. Cukela was wounded again during the fighting in the Champagne sector. Neither wound was serious.
In addition to the two Medals of Honor, Cukela was awarded the Silver Star by the Army; the Médaille militaire (he was the first Marine officer ever to receive this medal), the Légion d'honneur in the rank of Chevalier, the Croix de guerre with two palms, another Croix de guerre with silver star, all by France; the Croce al Merito di Guerra by Italy; and Commander's Cross of the Royal Order of the Crown of Yugoslavia. He also received three Second Division citations.
Cukela received a field appointment to the rank of second lieutenant in the Marine Corps Reserve on September 26, 1918 and was selected for a commission in the regular Marine Corps on March 31, 1919. Promoted to first lieutenant on July 17, 1919, he was advanced to the rank of captain on September 15, 1921. His promotion to major was effected on the day of his retirement, June 30, 1940.

After WW I
After the war, Cukela served at overseas bases in Haiti, Santo Domingo, the Philippines, and China, and at domestic stations in Quantico, Virginia; Philadelphia, Pennsylvania; Norfolk, Virginia; Hampton Roads, Virginia; Mare Island, California; Washington, D.C.; Nashville, Indiana, and Fort Knox, Kentucky.
From June 1933 to January 1934, Cukela served as a company commander with the Civilian Conservation Corps. His last years in the Marine Corps were spent at Norfolk, where he served as the post quartermaster. Retired as a major on June 30, 1940, he was recalled to active duty on July 30, of the same year.

Retirement death
During World War II the major served at Norfolk and Philadelphia. He finally returned to the inactive retired list on May 17, 1946. Cukela served a few days less than 32 years of active duty in the Army and Marines.
On March 19, 1956, Cukela died at the U.S. Naval Hospital, Bethesda, Maryland. Following services at St. Jane Frances de Chantel Church, Bethesda, he was buried with full military honors in Arlington National Cemetery on March 22, 1956.

Medal of Honor citations
Navy citation:
For extraordinary heroism while serving with the 66th Company, 5th Regiment, during action in Forest de Retz, near Viller-Cottertes, France, 18 July 1918. Sgt. Cukela advanced alone against an enemy strong point that was holding up his line. Disregarding the warnings of his comrades, he crawled out from the flank in the face of heavy fire and worked his way to the rear of the enemy position. Rushing a machine-gun emplacement, he killed or drove off the crew with his bayonet, bombed out the remaining part of the strong point with German hand grenades, and captured two machineguns and four men.
Army citation:
When his company, advancing through a wood, met with strong resistance from an enemy strong point, Sgt. Cukela crawled out from the flank and made his way toward the German lines in the face of heavy fire, disregarding the warnings of his comrades. He succeeded in getting behind the enemy position and rushed a machinegun emplacement, killing or driving off the crew with his bayonet. With German hand grenades he then bombed out the remaining portion of the strong point, capturing 4 men and 2 damaged machineguns.

Family and origin
Louis Cukela was the son of George and Jovana (Bubrich) Cukela. His mother died in 1900. After he had immigrated to the U.S., his father and three sisters remained in Austria-Hungary.
Cukela was married to Minnie Myrtle Strayer of Miflintown, Pennsylvania on December 22, 1923 in Washington, D.C. Mrs. Cukela died on August 10, 1956 just months after Major Cukela. At the time of his death, Major Cukela was also survived by a sister, Mrs. Zorka Cukela Dvoracek, of Šibenik Croatia).
There has been some controversy regarding Cukela's ethnicity. He rarely spoke about his heritage. During his lifetime he was called "an Austrian, Slav, Yugoslav, Serb and Croat", whereas Cukela preferred to be called an American Marine.
Posted by SemperFidelisNoah at 4:23 AM