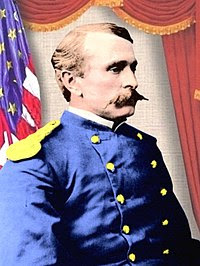 Frank Dwight Baldwin, (June 26, 1842 – April 22, 1923) a native of Constantine, Michigan, and born in Manchester, Michigan, is one of only 19 servicemen to receive the Medal of Honor twice. Baldwin received this award for his actions during the Atlanta Campaign where he led his company to battle at Peachtree Creek and captured two commissioned officers in the American Civil War. He received his second Medal of Honor for conspicuous bravery in 1874 during the Indian Wars.

Biography
He served through the Civil War in the 19th Michigan Infantry, fighting in all his regiment's battles from 1862 to 1865. Upon the postbellum reorganization of the Regular Army, he was commissioned into the 19th United States Regular Infantry as a Second Lieutenant. He eventually was assigned to the 5th U.S. Infantry, with whom he fought in the various frontier conflicts with the Indians. His actions in an attack on an Indian village on the Red River in Montana on December 18, 1876, earned him a brevet of Captain, U.S. Regular Army (awarded on February 27, 1890).
He served with distinction under General Nelson A. Miles as chief of scouts during campaigns against Sitting Bull and Crazy Horse. Baldwin also served in the Philippines during the Spanish-American War. He was promoted to Brigadier General, U.S. Regular Army on June 9, 1902. In 1906, he was advanced to Major General, after which he retired from active duty.
Baldwin ended his career as adjutant general of the state of Colorado. He died in Denver, Colorado, and was buried with full military honors in Section 3 of Arlington National Cemetery. His wife Alice Blackwood Baldwin honored the general's war contributions by compiling and editing the memoirs of her late husband in 1929. Along with General Baldwin, three other two time Medal of Honor recipients are interred in Arlington National Cemetery (Navy Lieutenant Commander John C. McCloy, Marine Major Louis Cukela, and Marine Corporal John Henry Pruitt).

Awards
First Medal of Honor
Rank and organization: Captain, Company D, 19th Michigan Infantry; First Lieutenant, 5th U.S. Infantry. Place and date: At Peachtree Creek, Georgia, July 12, 1864. Date of issue: December 3, 1891. Under a galling fire ahead of his own men, and singly entered the enemy's line, capturing and bringing back two commissioned officers, fully armed, besides a guidon of a Georgia regiment.

Second Medal of Honor
Place and date: At McClellan's Creek, Texas, November 8, 1874. Citation: Rescued, with 2 companies, 2 white girls by a voluntary attack upon Indians whose superior numbers and strong position would have warranted delay for reinforcements, but which delay would have permitted the Indians to escape and kill their captives.