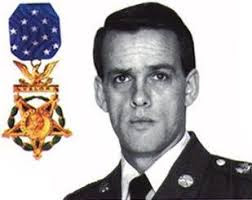 Gary Gordon
Master Sergeant, US Army
(My thanks to Ed Gilley of Gulf Breeze, Fla. for bringing my attention to this great American hero.)
***
Master sergeant Gary Ivan Gordon (August 30, 1960 – October 3, 1993) is a posthumous recipient of the Medal of Honor. At the time of his death, he was a non-commissioned officer in the United States Army's special operations unit, the 1st Special Forces Operational Detachment-Delta (1SFOD-D), or "Delta Force." Together with Sgt. First Class Randy Shughart, he earned the Medal of Honor for actions he performed during the Battle of Mogadishu in October 1993.

Biography
Gary Gordon was born in Lincoln, Maine in 1960. He graduated from Mattanawcook Academy in 1978. Gordon joined the U.S. Army at age 18. Gordon earned the Combat Infantryman Badge, Master Parachutist Badge, Ranger tab and the Special Forces tab. He served with the 2nd Battalion of the 10th Special Forces Group before being chosen to join the 1st Special Forces Operational Detachment-Delta (1SFOD-D), or "Delta Force" as a sniper.

Combat and death in Somalia
Gordon was deployed to Mogadishu, Somalia with other Delta members in the summer of 1993 as part of Task Force Ranger. On October 3, 1993 Gordon was Sniper Team Leader during Operation Gothic Serpent, a joint-force assault mission to apprehend key advisers to Somali warlord Mohamed Farrah Aidid. During the assault, Super Six One, one of the Army's Black Hawk helicopters providing insertion and air support to the assault team, was shot down and had crashed in the city. A Combat Search and Rescue (CSAR) team was dispatched to the first crash site to secure it. Shortly thereafter, Super Six Four was shot down as well. Ranger forces on the ground were not able to assist the downed helicopter crew of the second crash site as they were already engaged in heavy combat with Aidid's militia and making their way to the first crash site.
Gordon and his Delta Force sniper teammates Sergeant First Class Randall Shughart and Sergeant First Class Brad Hallings who were providing sniper cover from the air, requested to be dropped at the second crash site in order to protect the four critically wounded crew, despite the fact that large numbers of armed, hostile Somalis were converging on the area.
Mission commanders denied Gordon's request, saying that the situation was already too dangerous for the three Delta snipers to effectively protect the Blackhawk crew from the ground. Command's position was that the snipers could be of more assistance by continuing to provide air cover. Gordon, however, concluded that there was no way for the Black Hawk crew could survive on their own, and repeated his request twice until he finally received permission. Sergeant First Class Brad Hallings had assumed control of a minigun after a crew chief was injured and was not inserted with Shughart and Gordon.
Once on the ground, Gordon and Shughart, armed with only their personal weapons and sidearms, had to fight their way to the location of the downed Blackhawk. By this time more Somalis were arriving who were intent on either capturing or killing the American servicemen. When they reached Super Six Four, Gordon and Shughart extracted the pilot, Chief Warrant Officer Mike Durant and the other crew members from the aircraft, and established defensive positions around the crash.
Despite having inflicted heavy casualties against the Somalis, the two Delta snipers were too outnumbered and outgunned. Their ammunition nearly depleted, Gordon and Shughart finally were killed by Somali gunfire. It is believed that Gordon was first to be fatally wounded. His teammate Shughart retrieved Gordon's CAR-15 assault rifle and gave it to Durant to use. Shortly after, Shughart was killed and Durant was taken alive. Immediately after the battle, the Somalis counted 24 of their own men dead with many more severely wounded who may have died later of their wounds.
There was some confusion in the aftermath of the action as to who had been killed first. The official citation states that it was Shughart, but author Mark Bowden, author of Black Hawk Down: A Story of Modern War, the best-selling book about the October 1993 events, relates an account by Sergeant Paul Howe, another Delta operator participating in the battle. Howe said that he heard Shughart call for help on the radio and that the weapon handed to Durant was not the distinctive M14 used by Shughart. It is likely that Durant would have commented had it been an M14, as that weapon is very different from the CAR-15 Gordon had. Furthermore, Howe said that Shughart would never have given his own weapon to another soldier to use while he was still able to fight.
In Durant's book, In the Company of Heroes, he states that Gordon was on the left side of the Blackhawk, after both he and Shughart moved Durant to a safer location, and only heard Gordon say, "Damn, I'm hit." Afterwards Shughart came from the left side of the Blackhawk with the CAR-15.
After the attack on the United States on September 11, 2001, United States Special Forces units were inserted into Afghanistan to assist the Northern Alliance forces in overthrowing the Taliban and Al-Quaeda terrorists. Following an intense mountain battle known as Operation Anaconda in March 2002, U.S. troops searching a bunker complex found a GPS unit and holding pouch labeled "G. Gordon". Intelligence analysts believed at first this was Sergeant Gordon's GPS unit that he purchased on the private market and used in Somalia. The Gordon family was notified immediately of the find prior to the information being released to the public. It ultimately turned out that it wasn't Gordon's GPS but one of a helicopter pilot lost in an earlier fight during operation Anaconda.

Medal of Honor citation
On May 23, 1994, both Gordon and Shughart were posthumously decorated the Medal of Honor in recognition for the actions they took and the sacrifices they made to help protect the life of Durant and the crew of Super Six Four. They were the only soldiers participating in Operation Gothic Serpent to receive the military's highest honor, and the first Medal of Honor recipients since the Vietnam War.
Rank and organization: Master Sergeant, U.S. Army. Place and date: 3 October 1993, Mogadishu, Somalia. Entered service at: ----- Born: Lincoln, Maine. Citation: Master Sergeant Gordon, United States Army, distinguished himself by actions above and beyond the call of duty on 3 October 1993, while serving as Sniper Team Leader, United States Army Special Operations Command with Task Force Ranger in Mogadishu, Somalia. Master Sergeant Gordon's sniper team provided precision fires from the lead helicopter during an assault and at two helicopter crash sites, while subjected to intense automatic weapons and rocket propelled grenade fires. When Master Sergeant Gordon learned that ground forces were not immediately available to secure the second crash site, he and another sniper unhesitatingly volunteered to be inserted to protect the four critically wounded personnel, despite being well aware of the growing number of enemy personnel closing in on the site. After his third request to be inserted, Master Sergeant Gordon received permission to perform his volunteer mission. When debris and enemy ground fires at the site caused them to abort the first attempt, Master Sergeant Gordon was inserted one hundred meters south of the crash site. Equipped with only his sniper rifle and a pistol, Master Sergeant Gordon and his fellow sniper, while under intense small arms fire from the enemy, fought their way through a dense maze of shanties and shacks to reach the critically injured crew members. Master Sergeant Gordon immediately pulled the pilot and the other crew members from the aircraft, establishing a perimeter which placed him and his fellow sniper in the most vulnerable position. Master Sergeant Gordon used his long range rifle and side arm to kill an undetermined number of attackers until he depleted his ammunition. Master Sergeant Gordon then went back to the wreckage, recovering some of the crew's weapons and ammunition. Despite the fact that he was critically low on ammunition, he provided some of it to the dazed pilot and then radioed for help. Master Sergeant Gordon continued to travel the perimeter, protecting the downed crew. After his team member was fatally wounded and his own rifle ammunition exhausted, Master Sergeant Gordon returned to the wreckage, recovering a rifle with the last five rounds of ammunition and gave it to the pilot with the words, "good luck." Then, armed only with his pistol, Master Sergeant Gordon continued to fight until he was fatally wounded. His actions saved the pilot's life. Master Sergeant Gordon's extraordinary heroism and devotion to duty were in keeping with the highest standards of military service and reflect great credit upon him, his unit and the United States Army.

Legacy
Many things have been named after Gordon. Gordon Elementary School in Linden Oaks, Harnett County, North Carolina, which opened in January 2009, was named in his honor. The school is near Fort Bragg, where Gordon was stationed before being deployed to Somalia.
In the 2001 film Black Hawk Down, Gordon was portrayed by Danish actor Nikolaj Coster Waldau; the account would generally follow that of the book.
Posted by SemperFidelisNoah at 3:59 AM