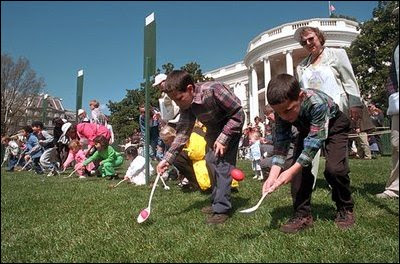 Egg rolling, or an Easter egg roll is a traditional game played with eggs at Easter. Different nations have different versions of the game, usually played with hard-boiled, decorated eggs.

History
The pre-Christian Saxons had a spring goddess Eostre, whose feast was held on the Vernal Equinox, around 21 March. Her animal was the spring hare, and the rebirth of the land in spring was symbolised by the egg. Pope Gregory the Great ordered his missionaries to use old religious sites and festivals and absorb them into Christian rituals where possible. The Christian celebration of the Resurrection of Christ was ideally suited to be merged with the Pagan feast of Eostre and many of the traditions were adopted into the Christian festivities. In England, Germany and other countries children traditionally rolled eggs down hillsides at Easter and it is thought that this may have become symbolic of the rolling away of the rock from Jesus Christ’s tomb before his resurrection. This tradition, along with others such as the Easter Bunny, were taken to the New World by European settlers

United States
In the United States, the Easter Egg Roll is an annual event, and is held on the White House lawn each Easter Monday for children and their parents.

The Egg Roll itself is a race, where children push an egg through the grass with a long-handled club. Surrounding events include appearances by White House personalities in Easter Bunny costumes, speeches and book-reading by Cabinet secretaries, and exhibits of artistically-decorated eggs.
Dolley Madison, the wife of President James Madison, began the event in 1814 and hundreds of children brought their decorated eggs to join in games. The original site was on the grounds of the United States Capitol, but in 1877 a new lawn was planted and the gardeners cancelled the event. Congress then passed a law making it illegal to use the grounds as a children's playground. At the request of a number of children, including his own, the then President Rutherford B. Hayes and his wife Lucy Hayes brought the event to the White House lawns. The practice was abandoned during Franklin D. Roosevelt's presidency, and revived by Mamie Eisenhower during her husband's term in office. Mrs. Eisenhower opened the event to black children for the first time.

United Kingdom
In the UK the tradition of rolling decorated eggs down grassy hills goes back hundreds of years and is known as "pace-egging", from the Old English Pasch meaning Easter. In Lancashire there are annual egg rolling competitions at Avenham Park in Preston and at Holcome Hill near Ramsbottom. There is an old Lancashire legend that says the broken eggshells should be carefully crushed afterwards or they will be stolen and used as boats by witches.
Other traditional egg rolling sites are the castle moat at Penrith, Bunkers Hill in Derby and Arthur's Seat in Edinburgh. The eggs were traditionally wrapped in onion skins and boiled to give them a mottled gold appearance (although today they are usually painted) and the children competed to see who could roll their egg the furthest.
The eggs were eaten on Easter Sunday or given out to pace-eggers – fantastically dressed characters who processed through the streets singing traditional pace-egging songs and collecting money as a tribute before performing traditional mumming plays. This tradition has also survived at Linctus Peverell in the Cotswolds. The young men of the village dress as mummers and sing the traditional - Gander song, - the first verse of which is:
Roodle oh my doddle oh
Roodle all the day
Now all you gay bachelors listen oh to me
Never get wed if you want to stay free
Billy cock, Billy cock
For who will boggle me gander
When I am far away?
Roodle oh my doddle oh
Roodle all the day

Other countries
In Germany, a prize is awarded to the contestant whose egg rolls fastest down a track made of sticks. In Holland, the contestant whose egg rolls furthest wins a prize. In Egypt, children bowl red and yellow eggs towards another row of eggs and whoever cracks one egg can claim them all. In eastern Europe, there are other traditions such as egg tapping and egg decorating.
****
FOOTNOTE: Millions of eggs in a shell are cooked during the Easter holiday. Let me suggest to you how best to cook them before the Easter paint job. I offer this recipe and suggest you don't over cook by boiling them too long.

Hard-Boiled Eggs
There is a right way and a wrong way in cooking eggs in the shell. This is a right way to cook them perfectly to your tastes without that gray-green tinge. Hard-boiled eggs should not be boiled for any length of time.

Posted by SemperFidelisNoah at 5:35 AM