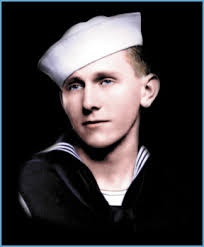 Douglas A. Munro
Douglas Albert Munro (October 11, 1919 – September 27, 1942) is the only member of the United States Coast Guard to have received the Medal of Honor, the U.S. military's highest decoration. Munro received the award posthumously for his actions in command of a landing craft on September 27, 1942 during the September Matanikau action in the Guadalcanal campaign of World War II.

Biography
Munro was born in Vancouver, British Columbia and became a U.S. citizen in 1922. He lived in South Cle Elum, Washington, where his father was employed by the Milwaukee Road. Munro is buried at the Laurel Hill Memorial Park in Cle Elum.

Medal of Honor citation
The citation for the Medal of Honor, which was presented to Douglas Munro's parents, reads as follows:

DOUGLAS ALBERT MUNRO, SIGNALMAN FIRST CLASS, U.S. COAST GUARD
For extraordinary heroism and conspicuous gallantry in action above and beyond the call of duty as Officer-in-Charge of a group of Higgins boats, engaged in the evacuation of a Battalion of Marines trapped by enemy Japanese forces at Point Cruz, Guadalcanal, on September 27, 1942. After making preliminary plans for the evacuation of nearly 500 beleaguered Marines, Munro, under constant risk of his life, daringly led five of his small craft toward the shore. As he closed the beach, he signalled the others to land, and then in order to draw the enemy's fire and protect the heavily loaded boats, he valiantly placed his craft with its two small guns as a shield between the beachhead and the Japanese. When the perilous task of evacuation was nearly completed, Munro was killed by enemy fire, but his crew, two of whom were wounded, carried on until the last boat had loaded and cleared the beach. By his outstanding leadership, expert planning, and dauntless devotion to duty, he and his courageous comrades undoubtedly saved the lives of many who otherwise would have perished. He gallantly gave up his life in defense of his country.
Douglas Munro's Medal of Honor is on display at the United States Coast Guard Training Center in Cape May, New Jersey.
Since Munro was operating under the authority of the Navy, he received the Navy Medal of Honor. A Coast Guard Medal of Honor exists, but only conjecturally and has never been issued.

Namesake
Two ships, the Coast Guard's USCGC Munro (WHEC-724) and the Navy's USS Douglas A. Munro (DE-422), as well as a barracks building located at USCG Training Center Cape May(Munro Hall), were named in his honor.

Posted by SemperFidelisNoah at 2:13 AM