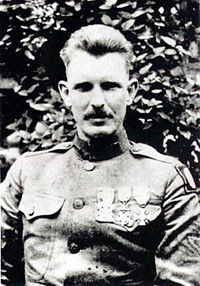 Alvin York
Alvin Cullum York (December 13, 1887 – September 2, 1964) was a United States soldier, famous as a World War I hero. He was awarded the Medal of Honor for leading an attack on a German machine gun nest, taking 32 machine guns, killing 28 German soldiers and capturing 132 others during the U.S.-led Meuse-Argonne Offensive in France.

Early years
Alvin Cullum York was born to an impoverished farming family in Tennessee on December 13, 1887, the third of eleven children. Up until a few years before the war, York was hard drinking and prone to fighting in saloons. His mother, a member of a pacifist Christian denomination, tried to convince York to change his ways to no avail. Then during a night of heavy drinking when he and a friend got into a fight with other saloon patrons, York's friend was killed. The event shook York so much that he finally followed his mother and became a Christian, no longer fighting or drinking. On June 5, 1917, at the age of 29, Alvin York received a notice to register for the draft. From that day until he arrived back from the War on May 29, 1919, he kept a diary of his activities.

York belonged to the Christian sect the Church of Christ in Christian Union which, despite having no specific doctrine of pacificism, discouraged warfare and violence. According to documentation (see image), York did apply for CO status but was not approved.

World War I 1917-1918
York was inducted into the United States Army and served in Company G, 328th Infantry Regiment, 82nd Infantry Division at Camp Gordon, Georgia. Discussion of the Biblical stance on war with his company commander, Captain Edward Courtney Bullock Danforth (1894–1974) of Augusta, Georgia and his battalion commander, Major Gonzalo Edward Buxton (1880–1949) of Providence, Rhode Island, eventually convinced York that warfare could be justified.
During a mission to secure the German Decauville rail-line on October 8, 1918, York's actions earned him the Medal of Honor. He recalled:
"The Germans got us, and they got us right smart. They just stopped us dead in our tracks. Their machine guns were up there on the heights overlooking us and well hidden, and we couldn’t tell for certain where the terrible heavy fire was coming from… And I'm telling you they were shooting straight. Our boys just went down like the long grass before the mowing machine at home. Our attack just faded out… And there we were, lying down, about halfway across [the valley] and those German machine guns and big shells getting us hard."
Seventeen men under the command of Sergeant Bernard Early (which included York) infiltrated behind the German lines to take out the machine guns. The group worked their way behind the Germans and overran the headquarters of a German unit, capturing a large group of German soldiers who were preparing to counter-attack against the US troops. Early’s men were contending with the prisoners when machine gun fire suddenly peppered the area, killing six Americans, Corp. Murray Savage, and Pvts. Maryan E. Dymowski, Ralph E. Weiler, Fred Waring, William Wins and Walter E. Swanson, and wounding three others, Sgt. Early, Corp. William S. Cutting (AKA Otis B. Merrithew) and Pvt. Mario Muzzi. The fire came from German machine guns on the ridge, which turned their weapons on the US soldiers. The loss of the nine put Corporal York in charge of the seven remaining U.S. soldiers, Privates Joseph Konotski (Kornacki), Percy Beardsley, Feodor Sok, Thomas C. Johnson, Michael A. Saccina, Patrick Donohue and George W. Wills. As his men remained under cover, and guarding the prisoners, York worked his way into position to silence the German machine guns. York recalled:
"And those machine guns were spitting fire and cutting down the undergrowth all around me something awful. And the Germans were yelling orders. You never heard such a racket in all of your life. I didn't have time to dodge behind a tree or dive into the brush… As soon as the machine guns opened fire on me, I began to exchange shots with them. There were over thirty of them in continuous action, and all I could do was touch the Germans off just as fast as I could. I was sharp shooting… All the time I kept yelling at them to come down. I didn't want to kill any more than I had to. But it was they or I. And I was giving them the best I had."
One of York’s prisoners, German first lieutenant Paul Jürgen Vollmer of 1st Battalion, 120th Württemberg Landswehr Regiment, emptied his pistol trying to kill York while he was contending with the machine guns. Failing to injure York, and seeing his mounting losses, he offered to surrender the unit to York, which was gladly accepted. By the end of the engagement, York and his seven men marched 132 German prisoners back to the American lines. His actions silenced the German machine guns and were responsible for enabling the 328th Infantry Regiment to renew the offensive to capture the Decauville Railroad.
York was awarded the Distinguished Service Cross for his heroism, but this was upgraded to the Medal of Honor, which was presented to York by the commanding general of the American Expeditionary Force, General John J. Pershing. The French Republic awarded him the Croix de Guerre and Legion of Honor. Italy and Montenegro awarded him the Croce di Guerra and War Medal, respectively.
York was a corporal during the action. His promotion to sergeant was part of the honor for his valor. Of his deeds York said to his division commander, General Duncan, in 1919: "A higher power than man power guided and watched over me and told me what to do."

Post-war life
On June 7, 1919, York married Gracie Williams. They had 7 children, all of whom were named after famous American historical figures.
York founded the Alvin C. York Agricultural Institute, a private agricultural school in Jamestown, Tennessee, that was eventually turned over to the State of Tennessee. The school, now known as Alvin C. York Institute, is the only fully state-funded public high school in the State of Tennessee. The school is a nationally recognized school of excellence and boasts the highest high school graduation percentage in the state. It is home to almost 800 students.
York also opened a Bible School, and later operated a mill in Pall Mall on the Wolf River.
During World War II he attempted to re-enlist in the Infantry but was denied due to age. Instead he went on bond tours and made personal appearances to support the war effort. He convinced the state of the need for a reserve force at home and was active in the creation of the Tennessee State Guard in 1941, in which he served as a Colonel and Commanding Officer of the 7th Infantry Regiment. He was also involved with recruiting and war bond drives as well as inspection tours of American soldiers in training.
Alvin York died at the Veterans Hospital in Nashville, Tennessee, on September 2, 1964, of a cerebral hemorrhage and was buried at the Wolf River Cemetery in Pall Mall.