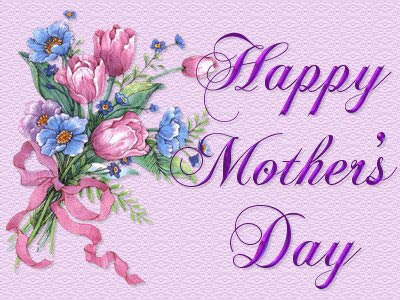 Mother's Day May 11
Our mothers deserves to be Queen for a day. It would be right to make her Queen every day of the year. As Abraham Lincoln once said, "All that I am, or hope to be, I owe to my angel mother." Those who are fortunate to still have mothers living know what would please her on Sunday, May 11. She might like flowers and I am sure she would like to be treated to dinner at the best restaurant in town.

Celebrating motherhood is a historical tradition dating back almost as far as mothers themselves. A number of ancient cultures paid tribute to mothers as goddesses, including the ancient Greeks, who celebrated Rhea, the mother of all gods. The ancient Romans also honored their mother goddess, Cybele, in a notoriously rowdy springtime celebration and the Celtic Pagans marked the coming of spring with a fertility celebration linking their goddess Brigid together with the first milk of the ewes.
During the 17th century, those living on the British isles initiated a religious celebration of motherhood, called Mothering Sunday, which was held on the forth Sunday during the Lenten season. This holiday featured the reunification of mothers and their children, separated when working class families had to send off their young children to be employed as house servants. On Mothering Sunday, the child servants were allowed to return home for the day to visit with their parents. The holiday's popularity faded in the 19th century, only to be reincarnated during World War II when U.S. servicemen reintroduced the sentimental (and commercial) aspects of the celebration American counterpart.
In the United States, Mother's Day experienced a series of false starts before eventually transitioning into the "Hallmark" holiday that we celebrate today. In 1858, Anna Reeves Jarvis was the first woman to hold an official celebration of mothers, when in her home state of West Virginia, she instituted Mothers' Work Day to raise awareness about local sanitation issues. During the Civil War, she expanded the scope of Mothers' Work Day to include sanitary conditions on both sides of the battlefield.
Meanwhile Julia Ward Howe, author of the "Battle Hymn of the Republic," attempted to institute a national celebration of mothers that honored women's inclinations toward peace (rather than cleanliness). In 1872, she initiated and promoted a Mother's Day for Peace, to be held on June 2, which was celebrated the following year by women in 18 cities across America. The holiday continued to be honored by Bostonian women for another decade, but eventually phased out after Howe stopped underwriting the cost of the celebrations.
Then in 1905, Anna Reeves Javis passed away and her daughter, Anna Javis, took up her mother's torch. Anna swore on her mother's gravesite that she would realize her lifelong dream of creating a national day to honor mothers. In 1907, Anna launched her campaign by handing out white carnations to congregants at her mother's church in Grafton, West Virginia. In 1908, her mother's church acquiesced to Anna's request to hold a special Sunday service in honor of mothers - a tradition that spread the very next year to churches in 46 states. In 1909, Anna left her job and dedicated herself to a full-time letter-writing campaign, imploring politicians, clergymen and civic leaders to institute a national day for mothers.
In 1912, Jarvis' efforts met with success: Her home state of West Virginia adopted an official Mother's Day; two years later, the U.S. Congress passed a Joint Resolution, signed by President Wilson, establishing a national Mother's Day emphasizing the role of women in their families - and not, like Julia Ward Howe's campaign, in the public arena. Ever since, Mother's Day has been celebrated by Americans on the second Sunday in May.
Perhaps the country's greatest proponent of motherhood, Anna Jarvis ironically never had children of her own. Yet that didn't stop her from making the celebration of Mother's Day her lifelong mission. In fact, as the holiday took on a life of its own, Jarvis expressed frequent dismay over its growing commercialization. "I wanted it to be a day of sentiment, not profit," she is quoted as saying.
Posted by SemperFidelisNoah at 9:04 AM