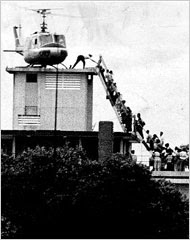 Vietnam War ended in 1975
In late April 1975, the outskirts of Saigon were reached by the North Vietnamese Army (NVA). On April 29th, the United States knew that their token presence in the city would quickly become unwelcome, and the remaining Americans were evacuated by helicopter or fixed-wing aircraft.

The surrender of Saigon was announced by the South Vietnamese president, General Duong Van Minh: "We are here to hand over to you the power in order to avoid bloodshed." General Minh had become South Vietnam’s president for two days as the country crumbled.
On April 30th, the North Vietnamese Army took over Saigon with little resistance, and it was quickly renamed Ho Chi Minh City in honor of their revolutionary leader, Ho Chi Minh, who had died several years before. Later in the day President Minh announced: "I declare the Saigon government [of South Vietnam] is completely dissolved at all levels."
America withdraws from Vietnam
U.S. commander General William Westmoreland was in charge of all operations during the Vietnam War until 1968. He commanded units full of young men placed in an alien environment, with no clear front in the conflict. Life in the jungle became a horrific experience for U.S. troops. Illegal drugs filtered their way into the daily routine of many servicemen, quickly corrupting any morale that had once been present.
***
Furthermore, for the first time, people back home began to resist the draft, and demonstrations against the war became a regular occurrence. Many Vietnam veterans also took part in the efforts to stop the war, which personalized the issue. The U.S. government could now see that the war was a "tar baby," and began to make plans to extricate its forces.
***
After great efforts by the U.S. to withdraw without losing the war, and the establishment of a peace agreement with North Vietnam in Paris on January 27th, 1973, American soldiers began to leave Vietnam for good. At that point, the war had left a black mark on humanity. Of the more than three million Americans who had served in the war, more than 58,000 were dead, and some 1,000 were missing in action. Approximately 150,000 Americans were seriously wounded.
***
North Vietnam's commitment to cease hostilities, as spelled out in the Paris Agreement, was hollow. Even as the U.S. military was rapidly departing the region, the NVA was plotting various strategic game plans to take the south.
***
Fall of Saigon and Operation Frequent Wind
By April 25th, 1975, after the NVA captured Phuoc Long city, Quang Tri, Hue, Da Nang and Hue, the South Vietnamese Army had lost its best units, more than a third of its men, and nearly half its weapons. The NVA were closing in on Saigon, which forced President Ford to order an immediate evacuation of American civilians and South Vietnamese refugees in Operation Frequent Wind.
***
The operation was put into effect by secret code. Remaining citizens, refugees, and officials were to stand by until the code was released. "White Christmas" was the code, which was broadcast on the morning of April 29th. Refugees and Americans then "high-tailed" it to designated landing zones.
***
U.S. Marine and Air Force helicopters, flying from offshore carriers, performed a massive airlift. In 18 hours, more than 1,000 American civilians and nearly 7,000 South Vietnamese refugees were flown out of Saigon.
***
South Vietnamese pilots also were permitted to participate in the evacuation, and they landed on U.S. carriers. More than 100 of those American-supplied helicopters (more than $250,000 each) were then pushed off carrier decks to make room for more evacuees.
***
At 4:03 a.m., April 30th, 1975, two U.S. Marines were killed in a rocket attack at Saigon's Tan Son Nhut airport. They were the last Americans to die in the Vietnam War. At dawn, the remaining marines of the force guarding the U.S. Embassy lifted off.
***
Only hours later, South Vietnamese looters ransacked the embassy as Soviet-supplied tanks, operated by North Vietnamese, rolled south on National Highway 1. On the morning of April 30th, Communist forces captured the presidential palace in Saigon, which ended the Second Indochina War.
Posted by SemperFidelisNoah at 2:39 PM