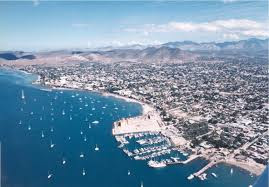 U.S. Marines captured capital of Baja California Sur
On April 13, 1847, the United States Marines captured La Paz, Calif., during the Mexican War. Fighting ended when U.S. Gen. Winfield Scott and his American troops occupied Mexico City on Sept. 14, 1847. The Mexican War between the United States and Mexico began with a Mexican attack on American troops along the southern border of Texas on April 25, 1848

Canada, to our north border has been a good neighbor, but Mexico to our south border has not been anything to write home about. The people of Mexico, with Mexican government blessing, are still on the attack and invading our shores from the north and south. The 20 million of them are illegal immigrants. They are bringing illegal drugs into our country, and robbing our health care centers which is costing the American taxpayers billions of dollars each year.

It is time to call on the United States Marine Corps once again. This below is the city the US Marines captured. Marines shoot with real bullets.

La Paz, Baja California Sur
La Paz is the capital of the Mexican state of Baja California Sur and an important regional commercial center. The city had a 2005 census population of 189,176 persons. Its surrounding municipality, which is the fourth-largest municipality in Mexico in geographical size, reported a population of 219,596 persons living on a land area of 20,275 km? (7,828.2 sq mi).

History
La Paz was first inhabited by neolithic hunter-gatherers at least 10,000 years ago who left traces of their existence in the form of rock paintings near the city and throughout the Baja peninsula. On May 3, 1535, Hernn Corts arrived in the bay by La Paz and named it Santa Cruz; he attempted to start a colony but abandoned his efforts after several years due to logistical problems. In 1596 Sebastian Vizcaino arrived, giving the area its modern name, La Paz.
La Paz is featured in the John Steinbeck novel The Pearl (1947) and mentioned extensively in his travelogue The Log from the Sea of Cortez (1951). The city is also the setting of the children's novella The Black Pearl (1967) by Scott O'Dell, chosen as a Newbery Honor Book in 1968.

Climate
During the summer the cooling Coromuel winds, a weather phenomenon unique to the La Paz area, blow during the night from the Pacific over the Peninsula and into the Bay of La Paz.

Economy
La Paz's population has greatly increased from the 2000 census and now stands at approximately a quarter of a million people. This growth is largely because the city enjoys one of the highest standards of living and quality of life in Mexico, with average wages in the range of $27 USD per day, whereas minimum wages in the country overall stand at closer to $4.25 USD per day. Many of the poorer southern Mexican States' workers often have to work for half of that. For this reason many migrate to La Paz, and other areas in Baja California Sur, to enjoy a better life and be able to remit portions of their incomes to their families in their home states.
Eco-tourism is by far the major source of tourism income in La Paz as people come to enjoy its marine wonders, as well as its diverse and often unique terrestrial species endemic to the region. There are some 900 islands and islets in the Gulf of California with 244 now under UNESCO protection as World Heritage Bio-Reserves and the Espiritu Santos Islands group, which borders the south eastern portion of the Bay of La Paz and are considered the crown jewels of the islands of the Gulf (also referred to as the Sea of Cortez/Mar de Cortes), the primary tourist destination of the area. Its diving, snorkeling, and kayaking are considered second to none.
La Paz is also favored by water enthusiasts for its marinas (Paraiso del Mar, Costa Baja Marina Marina de La Paz, Palmira Marina, and Marina Sur, soon to open) as well as its four boatyards, marine supply stores and cruiser club activities. The surrounding waters are full of adventure for experienced captains. Novice captains enjoy its nearby island coves for day or overnight trips along with a wealth of experienced sailors and boaters willing to share their expertise.
Industries include silver mining, agriculture, fishing and pearls. Tourism is also an important source of employment for this coastal community.
La Paz recently became a perfect place for retirement, along with its marinas a new set of developments are emerging(e.g.:Paraiso del Mar, Ventanas la Paz,...), this is due it's relative closeness to USA(2 hours flight from L.A.), the almost always warm weather, the beautiful nature around the place, the services the city offers and the relative peace find in this small city;

Transportation
La Paz is served by Manuel Mrquez de Len International Airport. Airlines flying into La Paz include Alaska, Delta, Alma, Interjet, AeroMexico, Mexicana, and AeroCalifornia. Two ferry services operate from the port of Pichilinque outside the city, connecting the Baja California peninsula to the mainland at Mazatln and Topolobampo, near Los Mochis.

Education
La Paz is the state capital and center of commerce, as well as the home of the three leading marine biology institutes in Latin America (UABCS CIBNOR & CICIMAR), largely because it sits on the Gulf of California which is the most bio-diverse body of water in the world. It also supports several other university level institutes of learning. The combination of those makes La Paz one of the best educated per capita in the nation and thus gives it the largest per capita number of environmental experts/investigators in the country, and likely in one of the highest in the world.
Posted by SemperFidelisNoah at 2:06 PM