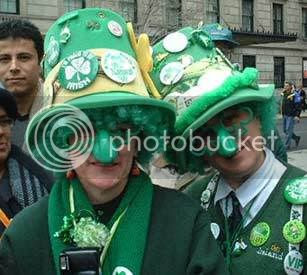 St. Patrick's Day - March 17
1756 - St. Patrick's Day was 1st celebrated in NYC at Crown & Thistle Tavern.
1762 - In New York City, the first parade honoring the Catholic feast day of St. Patrick, the patron saint of Ireland, is held by Irish soldiers serving in the British army. Saint Patrick, who was born in the late 4th century, was one of the most successful Christian missionaries in history.
Born in Britain to a Christian family of Roman citizenship, he was taken prisoner at the age of 16 by a group of Irish raiders who attacked his family's estate. They transported him to Ireland, and he spent six years in captivity before escaping back to Britain. Believing he had been called by God to Christianize Ireland, he joined the Catholic Church and studied for 15 years before being consecrated as the church's second missionary to Ireland.
Patrick began his mission to Ireland in 432, and by his death in 460, the island was almost entirely Christian. Early Irish settlers to the American colonies, many of whom were indentured servants, brought the Irish tradition of celebrating St. Patrick's feast day to America.
The first recorded St. Patrick's Day parade was held not in Ireland but in New York City in 1762, and with the dramatic increase of Irish immigrants to the United States in the mid-19th century, the March 17th celebration became widespread. Today, across the United States, millions of Americans of Irish ancestry celebrate their cultural identity and history by enjoying St. Patrick's Day parades and engaging in general revelry.
Irish toast: "May the enemies of Ireland never eat bread nor drink whisky, but be tormented with itching without benefit of scratching." -- Traditional St. Patrick's Day toast.
EASTER SUNDAY - March 23
Easter is the most important festival of Christians as it is observed to honor the Jesus' return to life. Easter is a festivity of colors and joy. It brings a message of hope along. It conveys the message that after the dark clouds, there is a ray of silver lining. Easter has a lot of significance especially for the Roman Catholics. They use the Julian calendar for the purpose of calculating the Easter day date. Read further to know when is Easter Sunday in 2008.
Easter always falls on the first Sunday after the full moon night of the spring season. Generally the Gregorian calendar is used for the purpose of computing the Easter date. In many countries, Easter Monday is granted as a legal holiday.
Posted by SemperFidelisNoah at 11:35 AM