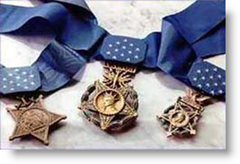 The Medal's History
On December 9, 1861 Iowa Senator James W. Grimes introduced S. No. 82 in the United States Senate, a bill designed to "promote the efficiency of the Navy" by authorizing the production and distribution of "medals of honor". On December 21st the bill was passed, authorizing 200 such medals be produced "which shall be bestowed upon such petty officers, seamen, landsmen and marines as shall distinguish themselves by their gallantry in action and other seamanlike qualities during the present war (Civil War)." President Lincoln signed the bill and the (Navy) Medal of Honor was born.

Two months later on February 17, 1862 Massachusetts Senator Henry Wilson introduced a similar bill, this one to authorize "the President to distribute medals to privates in the Army of the United States who shall distinguish themselves in battle." Over the following months wording changed slightly as the bill made its way through Congress. When President Abraham Lincoln signed S.J.R. No. 82 on July 12, 1862, the Army Medal of Honor was born. It read in part:
Resolved by the Senate and House of Representatives of the United States of America in Congress assembled, That the President of the United States be, and he is hereby, authorized to cause two thousand "medals of honor" to be prepared with suitable emblematic devices, and to direct that the same be presented, in the name of the Congress, to such non--commissioned officers and privates as shall most distinguish themselves by their gallantry in action, and other soldier-like qualities, during the present insurrection (Civil War)."