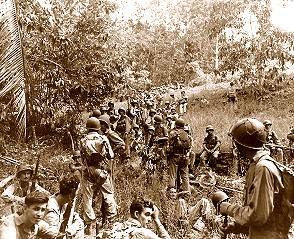 Guadalcanal World War II
The first major offensive launched by the Allies against Japan in World War II took place on Guadalcanal from August 7, 1942, to February 9, 1943. Since the attack on Pearl Harbor on December 7, 1941, the Japanese had advanced toward the South Pacific, threatening the Allies' South Pacific ferry route connecting Australia and the United States. In May and June, 1942, the U.S. Navy made headway against the Japanese advance in the Battles of the Coral Sea and Midway. These successes led the U.S. military to pursue a two-pronged assault in the Solomon Islands and New Guinea.

Guadalcanal, in the Solomon Islands, invaded by the Japanese in July, 1942, was one of the most important Japanese strongholds due to its proximity to Australia. The Japanese built an airfield at Lunga Point and artillery positions in the hills nearby and had about 8,400 men on the island by August.
On August 7, 1942, U.S. Marines landed on the northern beaches of Guadalcanal after Navy ships fired onto the island ahead of them. Over the next three months, the Marines secured the airfield and a 6 mile wide section of the beach.
On October 13, an Army unit arrived to reinforce the Marines. The Marines and Army soldiers repelled a Japanese attack on the 23rd, inflicting heavy losses on the Japanese and pushing the Japanese out further during the rest of the month.
On November 4th, the U.S. Infantry fought 1,500 Japanese troops that landed on the beach at Koli Point. They killed half the Japanese force. The rest escaped into the jungle.
In mid-November, the U.S. Navy fought the Japanese at the Battle of Guadalcanal, when the Japanese attempted a major reinforcement of troops via the "Tokyo Express" run of supply-laden destroyers. In this four-day battle, the U.S. Navy foiled the reinforcement effort, and only 4,000 of 10,000 Japanese troops reached land.
After this battle, the American troops pushed on in an effort to take Mount Austen. Thrashing through the jungle, they faced heavy fire from Japanese troops. Finally, during the first two days of 1943, in a two-pronged attack on the Mount Austen stronghold at Gifu, American troops succeeded in securing most of the Gifu area and the west slopes of the mountain.
Overall, between 400 and 500 Japanese troops died, and over 100 American troops died in the effort to take Mount Austen. During January, 1943, the American troops battled Japanese strongholds on Mount Austen to take areas known as Galloping Horse and Sea Horse and secure the Gifu area. In the third week of January, the American troops took the Japanese headquarters at Kokumbona.
American troops mounted attacks by land and sea to annihilate the Japanese, but in the end, about 13,000 Japanese troops escaped. Nevertheless, by February 9, 1943, the U.S. troops took control of the island, helping to turn back the Japanese drive toward Australia and secure a base from which to launch attacks at the Japanese in the South Pacific.
All told, 1,592 American troops were killed in action and 4,183 were wounded. Thousands more were disabled by tropical diseases like malaria. The Japanese lost 14,800 in battle and 9,000 from disease. About 1,000 Japanese men were taken prisoner.
Posted by SemperFidelisNoah at 2:05 PM