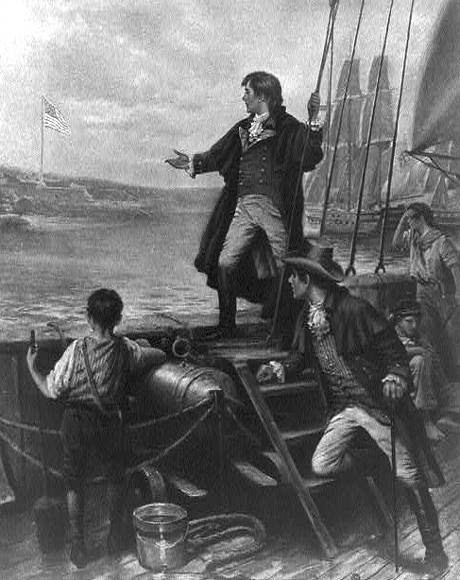 Once an English drinking song
It was once true that all people who were born in the United States of America, spoke English, after they were old enough. That is no longer correct. It has been estimated that 15 million citizens of Mexico, illegally immigrated into our county. Many have been here for years and still did not learn to speak English, our nation language. Lots of them have raised big families and most of their children have not learned to speak and understand English.

When Francis Scott Key penned "The Star-Spangled Banner," he lifted the melody from an old English drinking song. When the tune was accepted as our national anthem, that must have provided ample barroom fodder across the pond. A couple of centuries later, Jimi Hendrix rocked Woodstock?”and the country?? with his stunning and brilliant guitar riff take on it. Roseanne Barr Arnold got booed out of the ballpark with her tongue-in-cheek off-key belted-out version. Over the years, various recording artists have created their versions of "The Star-Spangled Banner." With such a mottled background, why shouldn't our national anthem have a Spanish-language version? Why is that scary and threatening to so many Americans?

The melody of our national anthem is stirring, though dreadful to sing. And then there are the lyrics, which were a nationalistic inspiration from the last ravages of a war. If I could re-write history, I'd rather our national anthem be "America, the Beautiful".

Quote Theodore Roosevelt, 1907:
In the first place, we should insist that if the immigrant who comes here in good faith, becomes an American and assimilates himself to us, he shall be treated on an exact equality with everyone else for it is an outrage to discriminate against any such man because of creed, or birthplace, or origin. But this is predicated upon the person's becoming in every facet an American, and nothing but an American... There can be no divided allegiance here. Any man who says he is an American, but something else also, isn't an American at all. We have room for but one flag, the American flag... We have room for but one language here, and that is the English language... and we have room for but one sole loyalty and that is a loyalty to the American people."
Posted by SemperFidelisNoah at 12:06 PM