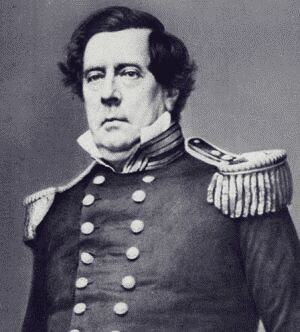 Early life and naval career
Born in Rocky Brook, Rhode Island, he was the son of Captain Christopher R. Perry and the younger brother of Oliver Hazard Perry. Matthew Perry got a midshipman's commission in the Navy in 1809, and was initially assigned to Revenge under the command of his elder brother.
Commodore Perry's early career saw him assigned to several ships, including the President where he was aide to Commodore John Rodgers, which was in a victorious engagement over a British vessel, HMS Little Belt shortly before the War of 1812 was officially declared. During that war Perry was transferred to USS United States and as a result saw little fighting in that war afterward, since the ship was trapped at New London, Connecticut. After that war he served on various vessels in the Mediterranean and Africa (notably aboard USS Cyane during its patrol off Liberia in 1819-1820), sent to suppress piracy and the slave trade in the West Indies. Later during this period, while in port in Russia, Perry was offered a commission in the Russian navy, which he declined.

Command assignments, 1820s-1840s
Opening of Key West
Perry commanded the Shark from 1821-1825. When Britain possessed Florida in 1763, the Spanish contended that the Florida Keys were part of Cuba and North Havana. The United States felt that Key West (which was then named Cayo Hueso, which means "Bone Island") could potentially be the "Gibraltar of the West" because it guarded the northern edge of the 90 mile wide Straits of Florida -- the deep water route between the Atlantic and the Gulf of Mexico. 1815 the Spanish governor in Havana, Cuba deeded the island of Key West, Florida to Juan Pablo Salas of Saint Augustine, Florida. After Florida was transferred to the United States, Salas sold Key West to U.S. businessman John W. Simonton for $2,000 in 1821. Simonton lobbied the U.S. Government to establish a naval base on Key West, both to take advantage of its strategic location and to bring law and order to Key West town.
On March 25, 1822, Perry sailed the schooner Shark to Key West and planted the U.S. flag, physically claiming the Keys as United States property.
Perry renamed Cayo Hueso "Thompson's Island" for the Secretary of the Navy Smith Thompson and the harbor "Port Rodgers" for the president of the Board of Navy Commissioners. Neither name stuck.
From 1826-1827 Perry acted as fleet captain for Commodore Rodgers. Perry returned for shore duty to Charleston, South Carolina in 1828, and in 1830 took command of USS Concord He spent the years of 1833-1837 as second officer of the New York Navy Yard (later the Brooklyn Navy Yard), gaining promotion to captain at the end of this tour.

Father of the Steam Navy
Perry had a considerable interest in naval education, supporting an apprentice system to train new seamen, and helped establish the curriculum for the United States Naval Academy. He was also a vocal proponent of modernizing the Navy. Once promoted to captain, he oversaw construction of the Navy's second steam frigate, USS Fulton which he commanded after its completion. He was called "The Father of the Steam Navy", and he organized America's first corps of naval engineers, and conducted the first U.S. naval gunnery school while commanding Fulton in 1839-1840 off Sandy Hook on the coast of New Jersey.

Promotion to commodore
Perry acquired the courtesy title of Commodore in 1841, and was made chief of the New York Navy Yard in the same year. In 1843 he took command of the African Squadron, whose duty was to interdict the slave trade under the Webster-Ashburton Treaty, and continued in this endeavor through 1844.

The Mexican-American War
In 1845 Commodore David Connor's length of service in command of the Home Squadron had come to an end. However, the coming of the Mexican-American War persuaded the authorities not to change commanders in the face of the war. Perry, who would eventually succeed Connor, was made second-in-command and captained the USS Mississippi . Perry captured the Mexican city of Fronter, demonstrated against Tabasco and took part in the Tampico Expedition. He had to return to Norfolk, Virginia to make repairs and was still there when the amphibious landings at Vera Cruz took place. His return to the U.S. gave his superiors the chance to finally give him orders to succeed Commodore Connor in command of the Home Squadron. Perry returned to the fleet during the siege of Veracruz and his ship supported the siege from the sea. After the fall of Veracruz Winfield Scott moved inland and Perry moved against the remaining Mexican port cities. Perry assembled the Mosquito Fleet and captured Tuxpan in April, 1847. In July 1847 he attacked Tabasco personally, leading a 1173-man landing force ashore and attacked the city from land.

The Opening of Japan: 1852-1854
Precedents
Perry's expedition to Japan was preceded by several naval expeditions by American ships:
* From 1797 to 1809, several American ships traded in Nagasaki under the Dutch flag, upon the request of the Dutch, who were not able to send their own ships because of their conflict against Britain during the Napoleonic Wars. Trade was limited to the Dutch and Chinese at that time (sakoku).
* In 1837, an American businessman in Canton, named Charles W. King, saw an opportunity to open trade by trying to return to Japan three Japanese sailors (among them, Otokichi) who had been shipwrecked a few years before on the coast of Washington. He went to Uraga Channel with Morrison, an unarmed American merchant ship. The ship was attacked several times, and sailed back without completing its mission.
* In 1846, Commander James Biddle, sent by the United States Government to open trade, anchored in Tokyo Bay with two ships, including one warship armed with 72 cannons, but his requests for a trade agreement remained unsuccessful.
* In 1848, Captain James Glynn sailed to Nagasaki, leading at last to the first successful negotiation by an American with "Closed Country" Japan. James Glynn recommended to the United States Congress that negotiations to open Japan should be backed up by a demonstration of force, thus paving the way to Perry's expedition.

First visit, 1852-1853
In 1852, Perry embarked from Norfolk, Virginia for Japan, in command of a squadron in search of a Japanese trade treaty. Aboard a black-hulled steam frigate, he ported Mississippi Plymouth Saratoga and Susquehanna at Uraga Harbor near Edo (modern Tokyo) on July 8, 1853, and was met by representatives of the Tokugawa Shogunate who told him to proceed to Nagasaki, where there was limited trade with the Netherlands and which was the only Japanese port open to foreigners at that time (see Sakoku). Perry refused to leave and demanded permission to present a letter from President Millard Fillmore, threatening force if he was denied. The Japanese military forces could not resist Perry's modern weaponry; the "Black Ships" would then become, in Japan, a threatening symbol of Western technology.
The Japanese government let Perry come ashore to avoid a naval bombardment. Perry landed at Kurihama (in modern-day Yokosuka) on July 14, presented the letter to delegates present, and left for the Chinese coast, promising to return for a reply.

Second visit, 1854
Perry returned in February 1854 with twice as many ships, finding that the delegates had prepared a treaty embodying virtually all the demands in Fillmore's letter. Perry signed the Convention of Kanagawa on March 31, 1854 and departed, mistakenly believing the agreement had been made with imperia representatives.
On his way to Japan, Perry anchored off of Keelung in Formosa, known today as Taiwan, for ten days. Perry and crew members landed on Formosa and investigated the potential of mining the coal deposits in that area. He emphasized in his reports that Formosa provided a convenient mid-way trade location. Formosa was also very defensible. It could serve as a base for exploration like Cuba had done for the Spanish in the Americas. Occupying Formosa could help the US to counter European monopolization of the major trade routes. The United States government did not respond to Perry's proposal to claim sovereignty over Formosa.

Return to the United States, 1855
When Perry returned to the United States in 1855, Congress voted to grant him a reward of $20,000 in appreciation of his work in Japan. Perry used part of this money to prepare and publish a report on the expedition in three volumes, titled Narrative of the Expedition of an American Squadron to the China Seas,and Japan. He was also advanced to the grade of rear-admiral on the retired list (when his health began to fail) as a reward for his services in the Far East.

Last years
Perry died on March 4, 1858 in New York City, of liver cirrhosis due to alcoholism. His remains were moved to the Island Cemetery in Newport, Rhode Island on March 21, 1866, along with those of his daughter, Anna, who died in 1839.

Posted by SemperFidelisNoah at 10:42 AM