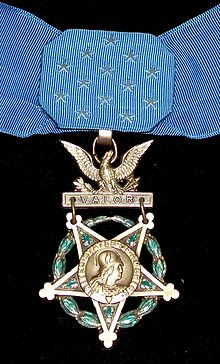 Medal of Honor to Two Vietnam Soldiers
A soldier who fell on a grenade in Vietnam and a Special Forces legend who ignored his own wounds to rescue comrades in a three-day battle were awarded the Medal of Honor Monday by President Obama at a White House ceremony.

The awards to Army Command Sgt. Maj. Bennie G. Adkins and posthumously to Army Spec. 4 Donald P. Sloat came after Congress upgraded their initial awards of the Distinguished Service Cross and waived the time limit requirements for the presentation of the nation's highest award for valor.

Dr. William Sloat, of Enid, Okla., accepted the MoH on behalf of his brother. Adkins, 80, and his wife, Mary, of Opelika, Alabama, were present as Adkins stood at attention while President Obama draped the Medal of Honor around his neck.

In the announcement of the awards last month, the White House also said that the Medal of Honor would go to Union First Lieutenant Alonzo H. Cushing, who was killed at the battle of Gettysburg. Cushing's ceremony will come at a later date.

Sloat, of Coweta, Oklahoma, was awarded the DSC for his actions on Jan. 17, 1970, in Vietnam's Quang Tin province while serving with the Army's 2nd Battalion, 1st Infantry Regiment, 196th Infantry Brigade of the Americal Division.

Sloat was killed a month before his 21st birthday when he covered a booby-trap grenade with his body while on patrol to save the lives of others in his unit.

"I was only five to eight feet behind Don, when the grenade went off," said former PFC DeWayne C. Lewis, Jr., who served with Sloat. "His act saved my life."

"Sloat's actions define the ultimate sacrifice of laying down his own life in order to save the lives of his comrades," according to an Army statement.

Adkins was drafted into the Army in 1956 and volunteered for the Special Forces in 1961.

He served three tours in Vietnam and his other awards include the Silver Star, two Bronze Stars, and the Purple Heart with four Oak Leaf Clusters.

In introducing Adkins, Obama said "I have to be honest. Bennie performed so many acts of bravery, we actually don't have time to list them all. Bennie ran into enemy fire again and again."

From March 9-12, 1966, Adkins was serving as a Sergeant First Class with Army Special Forces Detachment A-102 in Vietnam's A Shau valley, about 30 miles southwest of Hue City, which was a key infiltration route for North Vietnamese forces into South Vietnam.

"During the evacuation of a seriously wounded American, Adkins maneuvered outside the camp walls to draw fire and successfully covered the rescue," the DSC citation read.

The next day, the enemy launched the main attack and "although wounded with most of his team killed or wounded, he (Adkins) fought off the waves of attacking Viet Cong," the citation said.

"Adkins and the small group of remaining soldiers were ordered to evacuate the camp. Although they were running low on ammunition, they fought their way out of the camp and evaded the Viet Cong for two days until they were rescued," the citation said.

On the third day of the battle, Adkins and a small group from the unit set up a perimeter at night, Obama said. They were low on ammunition and all were wounded. The enemy began to close in.