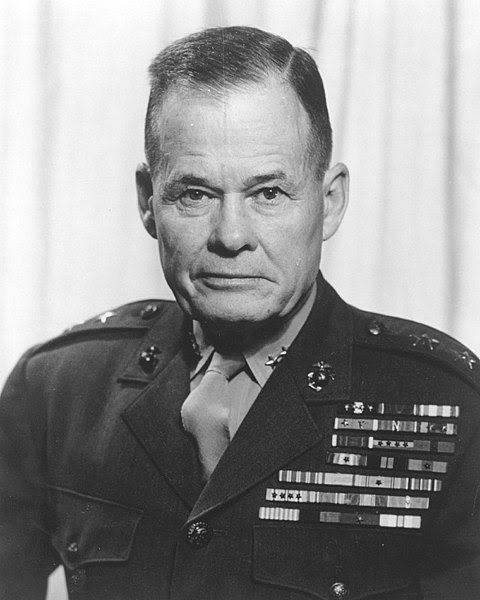 Lewis Burwell "Chesty" Puller, whose barrel chest and blunt manner inspired his nickname, was a thirty-seven-year veteran of the United States Marine Corps who rose to the rank of lieutenant general. The most-decorated Marine in history, he earned five Navy Crosses, the U.S. Navy's second-highest decoration, for fighting in Nicaragua, at Guadalcanal and in New Guinea during World War II (1939-1945), and at the Chosin Reservoir during the Korean War (1950-1953).

Lewis Burwell Puller was born in West Point,Virginia, on June 26, 1898. A second cousin of General George S. Patton and the grandson of a Confederate veteran, Puller came from a military family and idolized the likes of Thomas J. "Stonewall" Jackson and Robert E. Lee while growing up. He enrolled at the Virginia Military Institute in 1917 but left after a year with hopes of fighting in World War I (1914-1918). He was assigned, instead, to train recruits in South Carolina. In 1919, he graduated from Officer Training School as a second lieutenant but was immediately placed on the inactive list because of postwar troop reductions. Puller reenlisted as a corporal and was deployed to Haiti for five years to train the newly formed Gendarmerie d'Haiti, a constabulary force of Haitian enlisted personnel and Marine officers. He returned to the United States in 1924 and received his commission again as a second lieutenant.

After a two-year tour at Marine Barracks, Pearl Harbor, Hawaii, Puller was assigned to Nicaragua, where he earned the first of his five Navy Crosses while fighting rebels led by Augusto Sandino. On his second tour in Nicaragua, Puller earned another Navy Cross for his gallantry in fighting local rebel forces during a daring ten-day march. He then traveled to China to take command of the famous "Horse Marines" guarding American settlements around Beijing, but was recalled to the United States to teach at the Marine Officers Basic School at the Philadelphia Navy Yard in 1936. In 1940, he returned to China as the executive officer of the 2nd Battalion of the 4th Marine Regiment in Shanghai.

When World War II began, Puller was commanding the 1st Battalion, 7th Marine Regiment at New River (later renamed Camp Lejeune), North Carolina, and was sent with his unit to Guadalcanal in the summer of 1942. He won his third Navy Cross leading his battalion in defense of the island's Henderson Airfield against an overwhelming force of seasoned Japanese troops. Promoted to executive officer of the 7th Marine Regiment, Puller earned his fourth Navy Cross in January 1944 at Cape Gloucester in New Guinea, when he braved enemy fire to inspire his men during a Japanese counterattack. He was then given command of the 1st Marine Regiment, which he led at the Battle of Peleliu in the Palau Islands in September and October 1944. He returned to the United States the following month to train recruits at Camp Lejeune, where he remained for the rest of the war.

At the outbreak of the Korean War, Puller received command of his old unit, the 1st Marine Regiment, and led them during the landing at Inchon in September 1950. He then earned his fifth Navy Cross at the Chosin Reservoir later that year by "attacking in a different direction" against ten Chinese divisions. The action also earned him a promotion to brigadier general in 1951 and major general in 1953. In 1954, he assumed command of the 2nd Marine Division at Camp Lejeune but was forced to retire a year later because of ill health. He requested a return to service in 1966 to fight in Vietnam but was refused because of his age. His son, Lewis Burwell Puller Jr., also served as a Marine officer, losing both legs and parts of his hands in action in South Vietnam in 1968. His autobiography, Fortunate Son, won a Pulitzer Prize in 1992. The younger Puller killed himself two years later.

Lewis B. "Chesty" Puller died on October 11, 1971, at the age of seventy-three. He was buried in Saluda, in Middlesex County, where he spent his retirement. A Virginia Historical Highway Marker honoring him is located nearby on State Route 33, the "General Puller Highway."

Posted by SemperFidelisNoah at 2:21 AM