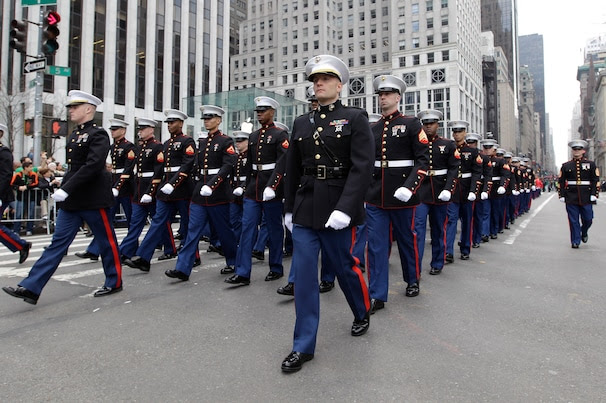 "On the streets of New York since 1762 - the oldest, largest, and best in the world" The parade marches up 5th Avenue, clan by clan. The Parade starts at 44th Street at 11 am and is held every March 17th, except when March 17th falls on a Sunday, it is celebrated the day before, Saturday the 16th because of religious observances.

The parade marches up Fifth Avenue past St. Patrick's Cathedral at 50th Street all the way up past the American Irish Historical Society at 83rd and the Metropolitan Museum of Art at 83rd Street to 86th Street, where the parade finishes around 4:30 - 5:00 pm

"The St. Patrick's Day Parade is one of New York City's greatest traditions. On this day, everyone is Irish in the Big Apple!

The Parade marched for the first time on March 17, 1762 - fourteen Years before the Declaration of Independence was adopted and today it is the largest Parade in the World.

This annual parade has been held for the past 247 years in honor of the Patron Saint of Ireland and the Archdiocese of New York. The Parade is reviewed from the steps of Saint Patrick's Cathedral by His Eminence Cardinal Edward Eagan, Archbishop of New York in the same manner as the Archbishop of New York did in the early days of the Parade at the Old St. Patrick's Cathedral in Lower Manhattan when the Parade was held in Lower Manhattan before the new St Patrick’s was built on Fifth Avenue.

Often regarded as the most popular parade in New York City, the Parade is the largest and most famous of the many parades held in the city each year."
Posted by SemperFidelisNoah at 1:36 PM