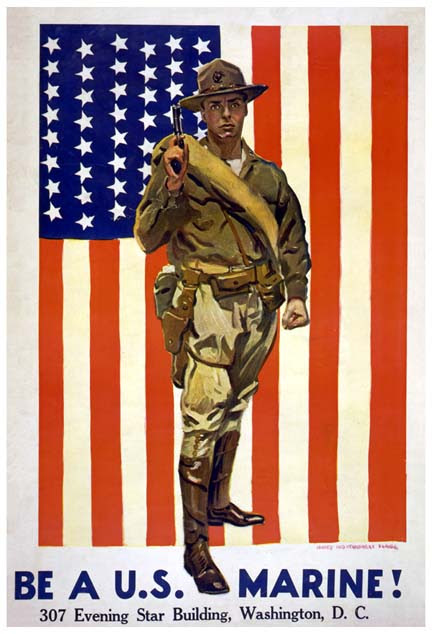 In 1914, the Marine Corps stood on the threshold of revolutionary change in its traditional mission of providing guards for ships and navy yards. During U.S. participation in World Wa I (1917–18), the Marines' numbers expanded from 10,000 to 73,000, one‐third of whom fought in France. As part of the U.S. Army's Second Division, the Marine Fourth Brigade distinguished itself against the German Army at the Battle of Belleau Wood, at Soissons, at Mont Blanc, and in the Meuse‐Argonne offensive. Some Marine leaders, such as Maj. Gen. John A. Lejeune, who was given command of the Second Division, subsequently saw the Corps' future moving away from sustained land operations.
In the decade after 1914, the Marines also developed their role as colonial infantry, imposing order and protecting U.S. interests overseas. In 1914, Marine units helped occupy the Mexican port of Veracruz and went ashore on three occasions in Haiti. In 1915, in the wake of bloody uprising, 2,000 Marines landed in Haiti with President Woodrow Wilson's goal of restoring order and reforming that troubled nation. One of them, Smedley Butler, took the rank of Haitian major general and organized a new national constabulary. The last of the Marines left in 1934. From 1916 to 1926, a Marine force occupied the Dominican Republic. In Nicaragua, Marines manned a legation guard, 1912–24, intervened in force in 1926, and returned in 1927 and remained until 1934. Marines also guarded the legation in Peking (Beijing), China, and kept at least one regiment in Shanghai from 1927 to 1941. In these actions, the Marines' fledgling air arm was shaped for direct support of ground operations.
The role of colonial infantry declined in the 1930s as the United States reduced the use of force in Latin America. But the diminishment of that role coincided with the expansion of a new mission: seizing and defending advanced naval bases in the Pacific. In the 1920s, with the U.S. Navy developing contingency plans for war with Japan, the Corps cut back to 20,000, and the Marines started to develop the doctrine of amphibious warfare. In 1921, Gen. Lejeune (commandant, 1920–29) approved a study by Maj. “Pete” Ellis to seize Japanese fortified islands in a future war as the U.S. Fleet battled its way across the western Pacific. Some exercises were conducted through 1926, but Marine attention was diverted to China and the Carib bean. During the depression, an attempt in 1931 by the U.S. Army to drastically curtail the Marines led the Corps and the navy to refocus on amphibious operations.
The Corps created the Fleet Marine Force in 1933, published its Tentative Manual for Landing Operations in 1934, and began new landing exercises with the navy. Technology lagged, however. Not until the late 1930s was a suitable landing craft developed.
In World War II, the Marine Corps, headed by Gen. Thomas Holcomb (commandant, 1936–44), fought the Japanese in the Pacific. Early in the war, ground and air Marines reinforced their reputations as tough fighters in desperate battles to defend the islands of Wake, Midway, and the Philippines. In mid‐1942, they shifted to their base‐seizure mission in the air‐land‐sea campaign against an expanded Japanese empire. The First Marine Division opened the Allied ground offensive in the Pacific in August 1942 in the Battle of Guadalcanal in the Solomons. It was a Marine and army campaign lasting through February 1943. The commander, Maj. Gen. Alexander A. Vandegrift, became Marine commandant in January 1944. The first real test of the Marines' amphibious doctrine against a hostile shore came on 20–23 November 1943 at the Battle of Tarawa in the Gilbert Islands, where, despite severe losses, the Marines proved that they could seize heavily fortified islands. In 1944–45, improved equipment and tactics and better coordination helped the Marines, sometimes accompanied by army units, succeed against increasingly sophisticated Japanese defenses on New Britain, the central and northern Solomons, and Roi‐Namur, Kwajalein, Eniwetok, Saipan, Tinian, Guam, Peleliu, Okinawa, and most famously Iwo Jima. Marine air also helped to liberate the Philippines.
During World War II, the Marine Corps expanded from 19,000 in 1939 to a peak strength of 475,000 men and women in 1945. The force structure had grown to two amphibious corps each composed of divisions and supporting units, plus five aircraft wings. The secretary of the navy declared that the historic flag‐raising over Iwo Jima meant that “there will be a Marine Corps for the next 500 years.”
Posted by SemperFidelisNoah at 9:07 AM