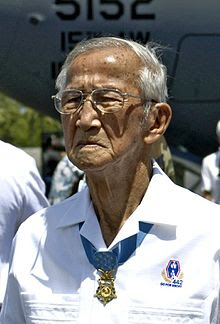 Barney F. Hajiro (September 16, 1916 – January 21, 2011) was a United States Army soldier and a recipient of the United States military's highest decoration—the Medal of Honor—for his actions in World War II.
Biography
Hajiro was born in Hawaii, the second of nine children born to Japanese immigrant parents who had moved from Hiroshima to Maui during World War I. Two of his siblings died in infancy. The family was poor, and Hajiro left school to work, first in the sugarcane fields of Maui and later as a stevedore in Honolulu. Shortly after the Japanese attack on Pearl Harbor, he was drafted into the U.S. Army and performed menial labor as part of an engineering battalion.
In March 1943, he volunteered to join the newly-formed 442nd Regimental Combat Team, composed of Nisei (second-generation Japanese Americans) like himself. The unit was sent to Europe and in May 1944 fought the Germans in Italy, north of Rome. From there the 442nd was redeployed to France, and on October 19, 1944 was fighting near Bruyères and Biffontaine in the eastern part of that country. Over the next ten days, Hajiro, a private in Company I, repeatedly distinguished himself in battle. He exposed himself to enemy fire while assisting an allied attack on October 19, and three days later he and a comrade ambushed an 18-man enemy patrol. On October 29, during the rescue of the so-called "Lost Battalion", which had been by surrounded by German forces in the Vosges Mountains, he single-handedly destroyed two German machine gun emplacements before being wounded. Shot in the shoulder and wrist, Hajiro's left arm was partially paralyzed. He was able to rejoin the 442nd in Monte Carlo, but was barred from further combat duty. He was then sent back to the United States to recover.
For his actions during October 1944, Hajiro received the Army's second-highest decoration, the Distinguished Service Cross, before being discharged. In 1948, he was awarded the Military Medal by the British government for his part in rescuing the Lost Battalion. A 1990s review of service records for Asian Americans who had received the Distinguished Service Cross during World War II led to Hajiro's award being upgraded to the Medal of Honor. In a ceremony at the White House on June 21, 2000, he was presented with the Medal of Honor by President Bill Clinton. Twenty-one other Asian Americans also received the medal during the ceremony, all but six of them posthumously. Four years later, in 2004, the French awarded Hajiro the Légion d'honneur.
Following the death of John William Finn on May 27, 2010, Hajiro became the oldest living Medal of Honor recipient. Hajiro died January 21, 2011 in Waipahu, Hawaii.
Medal of Honor citation
Hajiro's official Medal of Honor citation reads:
Private Barney F. Hajiro distinguished himself by extraordinary heroism in action on 19, 22, and October 29, 1944, in the vicinity of Bruyeres and Biffontaine, eastern France. Private Hajiro, while acting as a sentry on top of an embankment on October 19, 1944, in the vicinity of Bruyeres, France, rendered assistance to allied troops attacking a house 200 yards away by exposing himself to enemy fire and directing fire at an enemy strong point. He assisted the unit on his right by firing his automatic rifle and killing or wounding two enemy snipers. On October 22, 1944, he and one comrade took up an outpost security position about 50 yards to the right front of their platoon, concealed themselves, and ambushed an 18-man, heavily armed, enemy patrol, killing two, wounding one, and taking the remainder as prisoners. On October 29, 1944, in a wooded area in the vicinity of Biffontaine, France, Private Hajiro initiated an attack up the slope of a hill referred to as "Suicide Hill" by running forward approximately 100 yards under fire. He then advanced ahead of his comrades about 10 yards, drawing fire and spotting camouflaged machine gun nests. He fearlessly met fire with fire and single-handedly destroyed two machine gun nests and killed two enemy snipers. As a result of Private Hajiro's heroic actions, the attack was successful. Private Hajiro's extraordinary heroism and devotion to duty are in keeping with the highest traditions of military service and reflect great credit upon him, his unit, and the United States Army.
Posted by SemperFidelisNoah at 12:53 PM