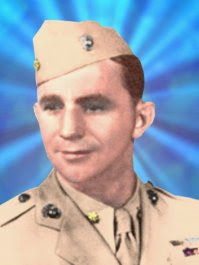 ROBERT E. GALER, USMC
Medal of Honor Recipient
Brigadier General Robert Edward Galer, a combat aviator and holder of the Nation's highest decoration, the Medal of Honor, for heroism in aerial combat during the Guadalcanal campaign of World War II, was promoted to his present rank on retirement, July 31, 1957. At the time of his retirement he was serving in Washington, D.C., as Assistant Director, Guided Missiles Division, Bureau of Aeronautics, Department of the Navy.
General Galer, then a major, was awarded the Medal of Honor on March 24, 1943, by former President Franklin D. Roosevelt in a White House ceremony.
The general was born in Seattle, Washington, October 24, 1913. He attended the University of Washington and graduated with a B.S. degree in commercial engineering in 1935, at which time he began elimination flight training at the Naval Reserve Aviation Base, Seattle. In June 1936, he began his Aviation Cadet flight training at the Naval Air Station, Pensacola, Florida, and was commissioned a second lieutenant in the Marine Corps, July 1, 1936.
Following his designation as a Naval Aviator in April 1937, he was transferred to the 1st Marine Brigade at Quantico, Virginia, for duty with Aircraft One. In July of the same year he was assigned to a course of instruction at the Basic School at Philadelphia, Pennsylvania. Following the completion of his studies in June 1938, he was ordered to the New York Navy Yard, but shortly thereafter was transferred to the Virgin Islands where he served with Marine Scouting Squadron-3 at St. Thomas. He was advanced to first lieutenant in July 1939.
Lieutenant Galer was returned to the United States in June 1940, and in July reported to the 2d Marine Aircraft Wing in San Diego, California. In January 1941, he was ordered to Hawaii and was appointed a captain in March 1941. He was serving at the Marine Corps Air Station, Ewa, Oahu, when the Japanese attacked Pearl Harbor on December 7, 1941.
In May 1942, he assumed command of Marine Fighting Squadron-224. It was while in command of this unit that he received the Nation's highest award, shortly after his promotion to the rank of major. He also received the British Distinguished Flying Cross for the same act of heroism.
Following the presentation of the Medal of Honor by the President at the White House, Major Galer was ordered to Marine Forces, Air, West Coast, Miramar, California, where he served as Assistant Operations Officer. Shortly after advancement to the rank of lieutenant colonel in November 1943, he was ordered to return to the Hawaiian Islands, where he became Chief of Staff, Marine Air, Hawaiian Area.
In May 1944, Lieutenant Colonel Galer was named as Operations Officer, 3d Marine Aircraft Wing. He served as an observer during the Palau Islands campaign while on temporary duty from the 3d Marine Aircraft Wing. His next assignment found him as Training Officer of Provisional Air Support Command, Fleet Marine Force, Pacific.
He again returned to the United States in June 1945, and in July he reported to the Marine Barracks, Naval Air Training Base, Corpus Christi, Texas, as officer in charge of a cadet regiment. He remained in that capacity until August 1947, at which time he was assigned as a student at the Armed Forces Staff College in Norfolk, Virginia.
In June 1948, he reported to Marine Aircraft Wing, at the Marine Corps Air Station, Cherry Point, North Carolina, where he served as Operations and Training Officer. He joined Headquarters Squadron-2 at that station in April 1949, and was transferred April 26, 1950, to the Naval Air Station, San Diego, California. He served there as Marine Planning Officer and, later, as Assistant Chief of Staff for Plans, on the Staff of the Commander, Air Force, U.S. Pacific Fleet. During his assignment, he was promoted to colonel in March 1951.
Colonel Galer sailed in March 1952 for Korea, where he saw duty as Assistant Chief of Staff, G-4 (Supply), of the 1st Marine Aircraft Wing until the following May. He was then named Commanding Officer of Marine Aircraft Wing there, and, for extraordinary achievement on July 11, was awarded a Gold Star in lieu of a second Distinguished Flying Cross. According to the citation accompanying this medal, he "led a maximum effort strike of Marine attack aircraft against a heavily defended industrial area in the North Korean capitol city of Pyongyang."
Colonel Galer was also awarded the Legion of Merit with Combat "V" for his service in Korea from May 24 to August 5, 1952, when he was shot down behind enemy lines by antiaircraft fire and later rescued by helicopter.
After a period of hospitalization, he returned to duty at El Toro, California, in October 1952, as Assistant Chief of Staff, G-1 (Personnel), and later, G-3 (Operations), of Aircraft, Fleet Marine Force, Pacific. He was enrolled as a student in the Air War College, Maxwell Air Force Base, Montgomery, Alabama, in July 1953. Upon graduation from the College the following June, he was transferred to Headquarters Marine Corps, Washington, D.C., where he became Assistant Director, Guided Missiles Division, Bureau of Aeronautics, Department of the Navy. He served in that capacity until January 1956, when he became Acting Director. The following June he was awarded a Masters Degree in Engineering Administration from the George Washington University, Washington, D.C. For exceptionally meritorious service in combat, he was advanced to brigadier general upon his retirement, July 31, 1957.
A complete list of General Galer's medals and decorations include the Medal of Honor, Legion of Merit with Combat "V", Distinguished Flying Cross with one Gold Star, Air Medal with four Gold Stars, Purple Heart, Presidential Unit Citation with one bronze star, American Defense Service Medal with Base Clasp, Asiatic-Pacific Campaign Medal with one silver star, American Campaign Medal, World War II Victory Medal, National Defense Service Medal, Korean Service Medal with two bronze stars, United Nations Service Medal, Distinguished Flying Cross (British Award), and the Korean Presidential Unit Citation.
Posted by SemperFidelisNoah at 5:43 AM