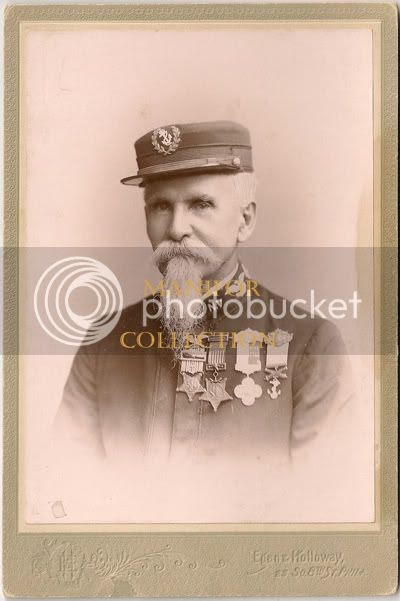 John F. Mackie
United States Marine Corps
Recipient of the first Medal of Honor
John Freeman Mackie (October 1, 1835–June 18, 1910) was a United States Marine and a recipient of America's highest military decoration—the Medal of Honor—for his actions in the American Civil War. He was the first Marine to receive the Medal of Honor.
***
Biography
Mackie enlisted in the Marine Corps from New York on August 23, 1861. By 1862, he held the rank of Corporal and was serving on the ironclad warship USS Galena (1862). On May 15, 1862, a five-ship Union Navy squadron, including the Galena, steamed up the James River to test the defenses of the Confederate capital, Richmond, Virginia. After reaching a bend in the river upstream of Dutch Gap, the squadron encountered submerged obstacles and heavy fire from Fort Darling, atop Drewry's Bluff. The fort's artillery batteries inflicted severe damage on the Galena and forced the Union squadron to turn back. During the battle (which would come to be known as the Battle of Drewry's Bluff), most of Galena's naval gun crew was killed or wounded. Mackie led a group of Marines who took over operation of the guns for the remainder of the battle.
***
Mackie later served at the Norfolk Naval Shipyard and aboard the USS Seminole (1859). It was aboard the Seminole that he received his Medal of Honor on July 10, 1863. Mackie rose to the rank of Orderly Sergeant before receiving an honorable discharge from the Marine Corps on August 24, 1865, after four years of service.
Mackie eventually married and settled near Philadelphia, Pennsylvania. He died at the age of 74 and is buried in Arlington Cemetery Co, Drexel Hill, Pennsylvania. His grave can be found in the Melrose section, lot 606, grave 2. At Drewry's Bluff, now within Richmond National Battlefield Park, a marker is posted which features Mackie's Medal of Honor action.
Medal of Honor citation
Rank and Organization:
Corporal, U.S. Marine Corps. Born: 1836, New York, N.Y. Accredited To: New York. G.O. No.: 17, July 10, 1863.
***
Citation:
On board the U.S.S. Galena in the attack on Fort Darling at Drewry’s Bluff, James River, on May 15, 1862. As enemy shellfire raked the deck of his ship, Corporal Mackie fearlessly maintained his musket fire against the rifle pits along the shore and, when ordered to fill vacancies at guns caused by men wounded and killed in action, manned the weapon with skill and courage.
Posted by SemperFidelisNoah at 4:58 AM