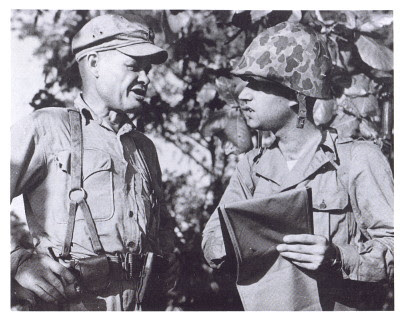 The Island of Peleliu
Col. Lewis 'Chesty' Puller, left, Commanding Officer of my 1st Marine Regiment, 1st Marine Division.
Victory in the Marianas in the summer of 1944 (Tinian, Saipan, and Guam) brought American forces within striking distance of the Philippine Islands and the Japanese home islands. In order to eliminate a possible threat on the right flank of General Douglas MacArthur's intended attack on the Philippines, the Japanese-held Palau Islands were targeted next.

Planning the Invasion of Peleliu
The Palaus are located southeast of the Philippines and 900 miles southwest of Guam, at the western end of the Carolines. The Palaus are an eighty-mile-long island chain, two of which were selected as targets for their potential airfields and relatively weak defenses: Peleliu and Angaur, six miles apart in the southern area of the chain. Both of the low rise volcanic islands were characterized by rough ground with cliffs, sinkholes, coral outcroppings, caves, and thick vegetation. Peleliu was 5Ѕ miles long and 2Ѕ wide with an airfield in the south and a swamp in the east. Three mile long Angaur was similar but much smaller.

The Japanese garrison in the Palaus had 49,000 men under Lt. Gen. Sadao Inoue, with 10,500 troops on Peleliu and 1,400 more on Angaur. The U.S. Army 81st Infantry Division and the 1st Marine Division were selected by Major General Roy S. Geiger's III Amphibious Corps to take the islands.
Peleliu D-Day: 15 September 1944
The battle for Peleliu was the longest and one of the toughest battles of the Pacific amphibious operations during World War II. Peleliu's defenders drew from lessons of other island campaigns where the Japanese tried and failed to stop the invaders on the beach. At Peleliu, Gen. Inoue's main defensive line was well inland, with indirect fire pre-registered on the beaches, followed by in-depth barriers, caves and pillboxes with fields of fire arranged to thwart and destory any attacker.
To prepare the way for the invasion, the U.S. Navy put down three days of heavy bombardment by surface vessels and aircraft. On the morning of 15 September 1944, the 1st Marine Division (1st, 5th and 7th Marines) under Maj. Gen. William H. Rupertus came ashore in Amtracs across Peleliu's southwest beaches in five zones designated White 1 & 2 and Orange 1 through 3. After a fierce daylong battle, by nightfall the Marines held about two miles of beaches, extending a mile inland. Over the next five days, the Marines advanced steadily, including capturing the airfield on the 16th, but the Japanese put up a vigorous defense causing casualty rates of up to fifty percent in some units. By 26 September the southern part of the island was secure, but the exhausted Marines were stalemated by Japanese defenders in their interconnected caves along the island's Umurbrogol backbone ridge.
The Capture of Angaur Island
The 81st Infantry Division went ashore on Angaur Island, 6 miles south of Peleliu, on 17 September. Beach conditions and opposition were much better than at nearby Peliliu. By 20 September, the 81st had defeated or isolated all of Angaur's 1,400 defenders. The 8lst's commander declared Angaur secure.
Marines Reinforced by the Army on Peleliu
Gen. Rupertus preferred Peleliu to be an all-Marine operation, but as casualties grew, on 22 September 1944 the 321st Infantry was transferred to Peleliu. After an artillery barrage and naval gunfire on the hills, the 321st moved inland on 21 September, while a Marine regiment leapfrogged to clear the northern tip of the island. The Army troops found a trail into the hills that they used to split the Japanese into two pockets, one to the south around Umurbrogol ridge, the other to the north. The Umurbrogol pocket proved difficult to overcome because of rough terrain, while, to the surprise of the Americans, General Inoue managed to land 500 fresh troops to reinforce the northern pocket.
On 27 September the 321st Infantry moved north with tanks and flamethrowers to assist and then relieve the Marines. After six days of cleaning out one cave and gulley after another, the 321st eliminated the Japanese on the last high ground, and on 30 September Gen. Geiger declared both Peleliu and Angaur captured.
Peleliu Captured But the Battle Goes On
The Marines and the Army controlled Peleliu, but the Japanese were far from finished. Japanese troops still held the Umurbrogol Pocket, the complex cave and ridge fortress that was ideal for a fanatic and suicidal defense. Marine infantry, armor, and artillery units hammered the pocket until 15 October, when they were relieved by Army units from the 81st Division. These troops fought a grueling and savage yard-by-yard battle through the jagged hills, the southern slopes of which earned the name "Bloody Nose".
To dislodge the Japanese from their interlocking cave defenses, new offensive seige techniques were introduced including air-dropped napalm, flamethrowers mounted on tanks and Amtracs, and fuel oil pumped into the caves followed by phosphorus grenades to ignite the oil. Sandbags were used to build small fortifications ("sandbag foxholes") that were inched forward to frustrate snipers until their position could be overwhelmed. A gasoline pipeline was run from a tanker truck to booster pumps, to throw napalm hundreds of feet ahead into Japanese defensive areas. Small pack howitzers were used to fire point blank into Japanese caves and pillboxes.
While the Army ground down the Peleliu defenses, the U.S. navy kept up patrols to prevent Japanese reinforcements from reaching the island from garrisons in the northern Pelaus. A typhoon in the first week of November delayed the drive, but afterward the Army captured the last Japanese source of fresh water on the island. On 27 November, the pocket was cleared and Peleliu declared secure after 74 days.
The struggle for Peleliu and Angaur had put the Marine and Army units into some of the most difficult fighting of the entire war for a small territory of questionable value. Two and one-half months of fighting on Peleliu and Angaur cost 1,252 Marines killed and 5,274 wounded, while Army lost 542 killed and 2,736 wounded. Eight Marines were awarded the Medal of Honor for actions on Peleliu. Almost all the Japanese defenders died, with only 302 captured.
Was Peleliu Necessary?
There is a long standing question of whether the losses necessary for the capture of Peleliu were essential. In fact, Admiral William F. Halsey recommended through Admiral Nimitz to the Joint Chiefs of Staff on 13 September 1944, two days before D-Day, that the landing be cancelled. But by that time, it was too late and the invasion went as planned. The Peleliu airfield was useful, not only in support of operations on Peleliu, but as the base for the air defense of the important fleet anchorage established at nearby Ulithi. It will never be settled if Peleliu was worth the cost.
Footnote to Peleliu
On 21 April 1947, a small band of Japanese holdouts was discovered on Peleliu. They formally surrendered only after considerable effort to convince them the war was over. Lieutenant Yamaguchi, who had maintained military discipline in the group for the intervening years, led 26 soldiers to a position in front of 80 battle-dressed Marines where he turned over his sword.
Posted by SemperFidelisNoah at 11:42 AM