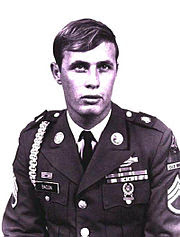 Nicky Daniel Bacon (November 25, 1945 - July 17, 2010) was a retired United States Army first sergeant from the Americal Division who served during the Vietnam War. For his actions in combat in Tam Ky, Vietnam, Bacon was awarded America's highest military decoration, the Medal of Honor.
Biography
Bacon was born in Caraway, Arkansas, and enlisted in the U.S. Army in Phoenix, Arizona. He reached the rank of staff sergeant while serving his second combat tour in Vietnam as part of the 21st Infantry Regiment, 11th Infantry Brigade of the Americal Division. On August 26, 1968, while commanding a squad of the first platoon of Company B, 4th Battalion in an operation west of Tam Ky, Bacon and his unit came under fire from enemy positions. While Bacon destroyed these positions with hand grenades, his platoon leader was wounded in open ground. Assuming command, Bacon led the platoon to destroy the remaining enemy emplacements.
When the third platoon of Bravo Company lost their own leader, Bacon took command of that platoon as well as his own and led both platoons against enemy positions. During the evacuation of the wounded, Bacon climbed the side of a nearby tank to gain a vantage point and direct fire into enemy positions, despite his exposure to enemy fire. He was personally credited with killing at least 4 enemy soldiers and destroying an anti-tank gun.
For his actions in this battle, Bacon was awarded the Medal of Honor. For his distinguished military service in Vietnam and throughout his career, he also received the Distinguished Service Cross, the Legion of Merit, two Bronze Stars (with combat "V"), the Purple Heart, the Combat Infantryman Badge, and numerous other awards and decorations.
After the war, Bacon continued to serve in the Army until his retirement as a first sergeant. He later served as president of the Congressional Medal of Honor Society and Director of Veterans' Affairs for the State of Arkansas. In the 1990s he traveled to Vietnam as part of a POW/MIA task force and traveled to Israel at the invitation of Jewish veterans, urging the Israeli government not to cede the Golan Heights to Syria. Bacon lived with his wife, Tamara, and their sons in Rose Bud, Arkansas, and remains active as a veterans' advocate.
Medal of Honor citation
Citation:
For conspicuous gallantry and intrepidity in action at the risk of his life above and beyond the call of duty. S/Sgt. Bacon distinguished himself while serving as a squad leader with the 1st Platoon, Company B, during an operation west of Tam Ky. When Company B came under fire from an enemy bunker line to the front, S/Sgt. Bacon quickly organized his men and led them forward in an assault. He advanced on a hostile bunker and destroyed it with grenades. As he did so, several fellow soldiers including the 1st Platoon leader, were struck by machine gun fire and fell wounded in an exposed position forward of the rest of the platoon. S/Sgt. Bacon immediately assumed command of the platoon and assaulted the hostile gun position, finally killing the enemy gun crew in a single-handed effort. When the 3d Platoon moved to S/Sgt. Bacon's location, its leader was also wounded. Without hesitation S/Sgt. Bacon took charge of the additional platoon and continued the fight. In the ensuing action he personally killed 4 more enemy soldiers and silenced an antitank weapon. Under his leadership and example, the members of both platoons accepted his authority without question. Continuing to ignore the intense hostile fire, he climbed up on the exposed deck of a tank and directed fire into the enemy position while several wounded men were evacuated. As a result of S/Sgt. Bacon's extraordinary efforts, his company was able to move forward, eliminate the enemy positions, and rescue the men trapped to the front. S/Sgt. Bacon's bravery at the risk of his life was in the highest traditions of the military service and reflects great credit upon himself, his unit, and the U.S. Army.
Posted by SemperFidelisNoah at 1:39 AM