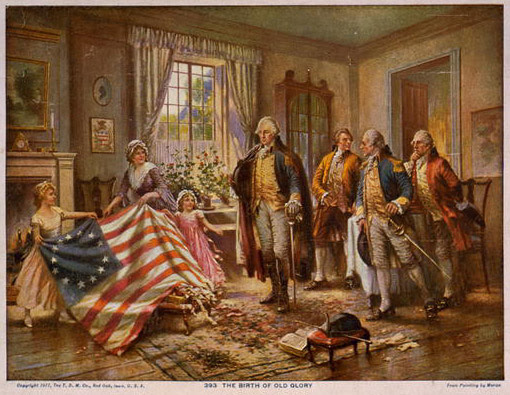 Flag Day
Flag Day will always be remembered by me. My mother, at age 90, died on Flag Day 1987. She is buried at Barnesville Cemetery, Northwest Lawrence County, Tennessee.

On June 14, Americans will observe Flag Day by waving Old Glory outside their homes and businesses.
George Washington and other members of the Continental Congress asked Betsy Ross, a young widow, to sew the first American flag in 1776. Betsy was in her early 20's when she completed the first flag with thirteen stars arranged in a circle.
A year later, the Continental Congress officially adopted the design for the national flag, and henceforward the Stars and Stripes symbolized the U.S. around the world.
The first "official" Flag Day was celebrated in 1877 - the flag's centennial. In 1916, a grass roots movement resulted in President Woodrow Wilson issuing a proclamation that called for a nationwide observance of Flag Day on June 14.
Although still not an official holiday, Flag Day was made a permanent observance in America in 1949 by Congress who resolved "That the 14th day of June of each year is hereby designated as Flag Day."
Questions about the flag
Why red, white and blue? To the original members of the Continental Congress, red stood for hardiness and courage, white for purity and innocence, and blue for vigilance and justice.

Why thirteen stars and stripes? They represented the thirteen American colonies which rallied around the new flag in their fight against the British for self-governance. The thirteen colonies included Connecticut, Delaware, Georgia, Maryland, Massachusetts, New Hampshire, New Jersey, New York, North Carolina, South Carolina, Pennsylvania, Rhode Island and Virginia.
To this day, thirteen stripes still commemorate the orginal colonies. Instead of thirteen stars, today the number of stars on the US flag has grown to 50, representing every state in the Union.
How to celebrate Flag Day
Wave Old Glory from the front porch, apartment balcony or window, or attend Flag Day parades or festivities sponsored by local organizations.
Hold an open house or a backyard barbecue. Decorate the backyard in red, white, and blue. A Flag Day menu might include lots of American favorites like hamburgers, hot dogs and, for desert, how about an American flag cake?

Posted by SemperFidelisNoah at 10:49 AM