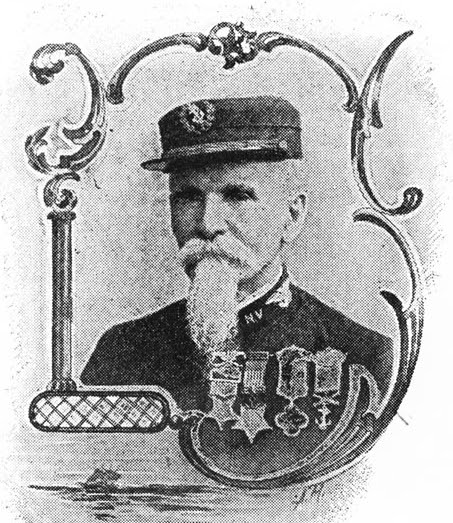 Marine Corps' first Medal of Honor winner. The award was made July 10, 1863.
On May 8, 1862 the Galena headed up the James River of Virginia with two other gunboats in an effort to reach Richmond and compel its surrender. On board was a detachment of 12 Marines.
USS Galena and U.S. Marines Join Forces
The U.S. Marine Corps consisted of less than 2,000 officers and enlisted men in 1861. That number was further reduced when many chose to follow the Confederacy. Corporal John F. Mackie, a native of New York City, stayed with the Union. A few days before, he had reported for duty aboard the newly commissioned USS Galena. He was joined by 11 other loyal Marines.
As the Union gunboats moved up the James the Confederate ironclad CSS Virginia a few days before. The latter was going to be used to defend Richmond but her draft was too deep for the journey. To keep her from falling into Union hands, she was set ablaze, but only after her crew removed her guns. Both crew and guns were then sent up the river to Drewry’s Bluff.
Drewry’s Bluff was a strategic point overlooking the James River. It was a perfect place to stop the Union flotilla advancing up the river. The fate of Richmond depended on it.
The commander of the Galena hoped to engage the Confederate battery while the rest of the flotilla slipped by. The heavily clad Monitor was unable to elevate her guns high enough to help. As a result, the Galena found herself in a crippling position as cannon fire soon rained down upon her deck.
"We turned our attention to the Galena," reported Confederate Commander Ebenezer Farrand, "nearly every one of our shots telling upon her iron surface." The rebel barrage was too much for the lightly armored Galena. Punctured plates were ripped apart and splintered wood flew through the ship.
Adding insult to injury, Confederate Marines were in sniping positions along the shore. "Our sharpshooters did good service, picking off every man who showed himself," Farrand later wrote.
"Here’s a chance for the Marines!"
On board the Galena, Corporal Mackie and his Marines resolutely returned fire. Suddenly a huge round hit the deck of the Galena, wiping out an entire gun crew. Mackie, nearby, jumped up and shouted, "Come on, boys. Here’s a chance for the Marines." His stunned men rallied, clearing the decks of dead and wounded.
Amidst a hail of Confederate fire, Mackie and his Marines began loading and firing the remaining Parrott rifle. Though they feverishly kept firing, Mackie saw the ship turning into a complete wreck!"
The Galena was finally forced to break off the engagement, limping back downstream to join the retreating Union flotilla. In three hours of conflict she lost 12 men dead and 11 wounded. The ship had taken at least 28 direct hits from rebel artillery. Many of the smoldering projectiles were still lodged in the hull and deck.
Amazingly, the Galena was repaired, but in February of 1864 the iron plating was removed and she was re-commissioned as a wood-hulled ship. She served valiantly as part of Admiral David Farragut’s fleet off Mobile, Alabama. She continued to serve after the War, finally being decommissioned in 1869.
Corporal John Mackie, meanwhile, became the first Marine ever to be awarded the newly created Congressional Medal of Honor. It was for his extraordinary gallantry aboard the USS Galena, where both men and machine refused to give up. Surely Grant and the citizens of Galena would have been proud.
Posted by SemperFidelisNoah at 7:30 AM