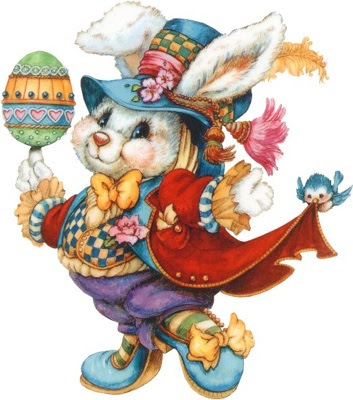 Easter Bunny
The Easter Bunny or Easter Hare (sometimes Spring Bunny in the U.S.) is a character depicted as rabbit bringing Easter eggs, who sometimes is depicted in an anthropomorphic way (e.g. with clothes). In legend, the creature brings baskets filled with colored eggs, candy and sometimes also toys to the homes of children on the night before Easter. The Easter Bunny will either put the baskets in a designated place or hide them somewhere in the house or garden for the children to find when they wake up in the morning.

The Easter Bunny is very similar in trait to its Christmas holiday counterpart, Santa Claus, as they both bring gifts to good children on the night before their respective holiday. It was first mentioned in Georg Franck von Frankenau's De ovis paschalibus (About the Easter Egg) referring to an Alsace tradition of an Easter Hare bringing Easter Eggs (and the negative impact of too much egg consumption).
Origins
The Easter Bunny as an Easter symbol bringing Easter eggs seems to have its origins in Alsace and the Upper Rhineland, both then in the Holy Roman Empire of the German Nation, and southwestern Germany, where it was first recorded in a German publication in the early 1600s. The first edible Easter Bunnies were made in Germany during the early 1800s and were made of pastry and sugar.
The Easter Bunny was introduced to America by the German settlers who arrived in the Pennsylvania Dutch country during the 1700s. The arrival of the "O_ster Haws_e" (a phonetic transcription of a dialectal pronunciation of the German Osterhase) was considered one of "childhood's greatest pleasures," similar to the arrival of Kriist Kindle (from the German Christkindl) on Christmas Eve.
According to the tradition, children would build brightly colored nests, often out of caps and bonnets, in secluded areas of their homes. The "O_ster Haws_e" would, if the children had been good, lay brightly colored eggs in the nest. As the tradition spread, the nest has become the manufactured, modern Easter basket, and the placing of the nest in a secluded area has become the tradition of hiding baskets.
Symbols
Rabbits and hares
Eggs, like rabbits and hares, are fertility symbols of extreme antiquity. Since birds lay eggs and rabbits and hares give birth to large litters in the early spring, these became symbols of the rising fertility of the earth at the Vernal Equinox.
The saying "mad as a March hare" refers to the wild caperings of hares as the males fight over the females in the early spring, then attempt to mate with them. Since the females often rebuff the males' advances before finally submitting, the mating behavior often looks like a crazy dance; these fights led early observers to believe that the advent of spring made the hares "mad." This bold behavior makes the hares, normally timid and retiring animals, much more conspicuous to human observation in the spring.
Rabbits and hares are both prolific breeders. The females can conceive a second litter of offspring while still pregnant with the first. This phenomenon is known as superfetation. Lagomorphs mature sexually at an early age and can give birth to several litters a year (hence the sayings, "to breed like bunnies" or "multiply like rabbits"). It is therefore not surprising that rabbits and hares should become fertility symbols, or that their springtime mating antics should enter into Easter folklore.
Eggs
The precise origin of the ancient custom of coloring eggs is not known, although evidently the blooming of many flowers in spring coincides with the use of the fertility symbol of eggs - and eggs boiled with some flowers change their color, bringing the spring into the homes. Many Christians of the Eastern Orthodox Church to this day typically dye their Easter eggs red, the color of blood, in recognition of the blood of the sacrificed Christ (and, of the renewal of life in springtime). Some also use the color green, in honor of the new foliage emerging after the long dead time of winter.
German Protestants wanted to retain the Catholic custom of eating colored eggs for Easter, but did not want to introduce their children to the Catholic rite of fasting. Eggs were forbidden to Catholics during the fast of Lent, which was the reason for the abundance of eggs at Easter time.
The idea of an egg-laying bunny came to the United States in the 18th century. German immigrants in the Pennsylvania Dutch area told their children about the "Osterhas," sometimes spelled "Oschter Haws." "Hase" means "hare," not rabbit, and in Northwest European folklore the "Easter Bunny" indeed is a hare, not a rabbit. According to the legend, only good children received gifts of colored eggs in the nests that they made in their caps and bonnets before Easter. In 1835, Jakob Grimm wrote of long-standing similar myths in Germany itself. Grimm suggested that these derived from legends of a goddess called Ostara, but as a romanticist, he tried to connect contemporary customs to pre-Christian traditions, knowing that no written sources of that time existed. Additionally, a goddess of that name is only mentioned in a single ancient source giving an ambiguous statement about an Ostara month.
Media
Easter has become a commercially celebrated event, with shops and media advertising Easter around Spring. The Easter Bunny is usually a big part of Easter for younger children, so, it often appears on Easter commercials. The Easter Bunny is also featured a lot on Easter TV specials, and in Easter themed films, such as Here Comes Peter Cottontail: The Movie.
Posted by SemperFidelisNoah at 11:27 AM