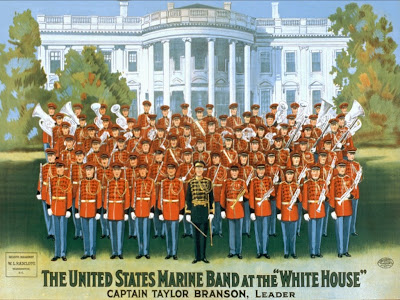 First Marine Corps Music
The history of American military music begins at the vortex of the fife and drum corps and the European military band with the establishment of the U. S. Marine Band in 1798. Fifes and drums are among the oldest forms of military music. The drum was used in the ancient civilizations of Egypt, Persia, and Greece. The Romans introduced the drum into Western Europe and Britain, and the English carried it during the Crusades. The drum, being a loud instrument, was used to beat calls for military formations, to signal commands, and to "beat the charge." Its rhythmic beat was also admirably adapted for regulating the movements of soldiers on the line of the march.

The fife was formerly called the Swiss flute. This name was given to it after the battle of Marignano in the year 1515, on which occasion the fife was first employed in war by the Swiss troops. The fife was introduced into England as early as 1557, but was first used together with the drum for martial music by the British guards, on order of the Duke of Cumberland, in 1747, and later adopted by other English regiments of infantry. It was from association with the British troops on duty in America that our colonial militia learned the art of drumming and fifing. Drums and fifes were the only musical instruments used by our military forces during, and for many years after, the Revolutionary War.

The first drummers and fifers in the United States Marine Corps were enlisted as members of the First and Second Battalions of American Marines authorized by Congress on November 10, 1775. On their drum was painted a rattlesnake, and under it, the inscription, "Don't tread on me." The records show that two drummers and one fifer were generally part of each ship's Marine Guard in our early Navy.

On July 11, 1798, President John Quincy Adams approved a bill that authorized the Marine Corps to enlist a drum major, one fife major, and 32 drummers and fifers. These musicians were used to form the famous United States Marine Band, the oldest organization of its kind in the country. On August 21, 1800, the Marine Band presented its first public concert in Washington "on a hill overlooking the Potomac" (the future site of the Naval Hospital). Then on March 4, 1801, the Marine Band performed for Thomas Jefferson's inauguration, and has played at every Presidential inauguration since. It was Jefferson that gave the Marine Band the title "The President's Own."

For the next century following the Revolutionary War, drummers and fifers played their part in making Marine Corps history. They served with distinction at Tripoli, in the War of 1812, and in the storming of Chapultepec. In the Civil War, the stirring music of the fife and drum probably arose to its greatest heights, as many memorable tunes were written during those four long years of war.

About 1875, the Army discontinued the use of the fife and adopted the bugle. This was due to the influence of the Franco-Prussian War, which changed the formations of troops in the field from closed to extended lines. As it was difficult to control such organizations by voice, the bugle was adapted and used to signal commands. In 1881, the Marine Corps also did away with the fife and adopted the bugle in its place. The grizzled old fifers who tried to continue to use their fifes fought this change. A music school was established at the Marine Barracks, Washington, D. C., for their instruction, but they still protested, claiming they had enlisted as fifers, not as buglers. Finally, commander directed that no fifer would be permitted to reenlist without a written agreement that he would learn to blow a bugle.

In former years, the captain of each naval vessel prescribed the calls blown on his ship and these Marine drummers and fifers were required to know these pieces. For instance, Annie Laurie might be played for Morning Colors, and Auld Lang Syne for Retreat. It was not until 1892 that the Navy issued instructions making all bugle calls uniform and standard.

The use of military bands and military music is coeval with that of the development of organized armies in Europe during the fifteenth and sixteenth centuries. The mercenary troops of the Austrians, and the French, maintained large bands of trumpets and kettledrums and when they met in the battles of Marignano (1515) and Pavia (1525), the clash of the instruments was as strident and as fear-inspiring as the clash of armor and weapons.

The music of these groups was limited mainly to battle signals and to visual display such as was to be found, for example, in the extravagant and affected movement of the kettledrums that survive today with modern-day drum majors, and in the heraldic flourishes of the trumpeters who were organized into guilds and endowed with many privileges that distinguished them from civilian musicians of the day.

It was not until the advent of the eighteenth century that the introduction of melody instruments, such as oboe, bassoon, French horn, and clarinet led to a broader repertory of military music. The growth and popularity of wind bands, both military and civilian, continued from the early sixteenth century and eventually spread all over Europe.

Although the Germans were the pioneers of military music, the French and English were avid supporters and followers. By 1750, European military bands included oboes, clarinets, bassoons, horns, trumpets, trombones, and drums. Further, their musical quality was good and improving. The addition of piccolos, bass drums, and cymbals occurred around 1800, marking an important step toward the instrumentation of the modern military band.

A performance given in Berlin in 1838 in honor of the Russian Emperor, in which a combined band of sixteen infantry and sixteen cavalry regiments, was assembled and in which over twelve hundred musicians participated, was a landmark in the development of military bands and music.

The bass tuba made its appearance in the military band at this time and composition of instruments for the military band was completed in 1850 with the addition of the saxophone. The beginning of military music in America occurred during the revolutionary period and mainly consisted of fife and drum playing.

Although Congress authorized the Army to form brigade bands in 1792, this was not affected until 1812. The first Marine Band, organized in 1798, consisted of a drum major, a fife major, and thirty-two drummers and fifers. When this unit moved to Washington, D. C. with the Federal government in 1800, it consisted of at least two oboes, two clarinets, two horns, a bassoon, and a snare drum. Since that time, bands have appeared in all branches of the American military with each service supporting a premiere band in Washington, D.C.

Posted by SemperFidelisNoah at 4:35 PM