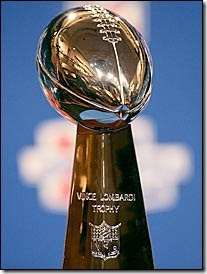 Super Bowl Football
The first Super Bowl football game was played 43 years ago. Each year after 1967, it got bigger and better. These teams who play in the Super Bowl are the very best because they were winners in each league during the season.

I remember the first Super Bowl very well, but I did not see it. After filming a Ford commercial for the game at Lake Placid, New York, and while the game was being played on Jan. 15, 1967, I was driving my new 1965 Ford Mustang convertible to Hollywood, Calif. for a new assignment.

Super Bowl 44 will be played on Sunday, Feb. 7. It will be played in Miami between the Colts and Saints. Both quarterbacks like to throw the ball and the score will be much higher than Super Bowl I.

Background
Origins
The First AFL-NFL World Championship Game was established as part of the June 8, 1966 merger agreement between the NFL and the AFL. However, Los Angeles was not awarded the game until six weeks prior to the kickoff. The date of the game was also not set until around that time. Since the AFL Championship Game was originally scheduled for Monday, December 26 and the NFL Championship Game for Sunday, January 1 (the reverse of the situation in 1960), it was suggested the game be played on Sunday, January 8, 1967. It was eventually decided to hold an unprecedented TV doubleheader on January 1, 1967, with the AFL Championship Game in Buffalo starting at 1 p.m. and the NFL Championship Game in Dallas starting at 4 p.m.
Coming into this first game, there was considerable animosity between the two rival leagues, with both of them putting pressure on their respective champions to trounce the other and prove each league's dominance in professional football. Still, many sports writers and fans believed that the game was a mismatch, and that any team from the long-established NFL was far superior to the best team from the upstart AFL.The 2 teams that played were the Green Bay Packers and the Kansas City Chiefs. The Packers ended up winning 35 to 10.
Kansas City Chiefs
The Chiefs entered the game after recording an 11-2-1 mark during the regular season. In the AFL Championship Game, they beat the Buffalo Bills, 31-7.
Kansas City's high powered offense led the AFL in points scored (448) and total rushing yards (2,274). Their trio of running backs, Mike Garrett (801 yards), Bert Coan (521 yards), and Curtis McClinton (540 yards) all ranked among the top ten rushers in the AFL. Quarterback Len Dawson was the top rated passer in the AFL, completing 159 out of 284 (56 percent) of his passes for 2,527 yards and 26 touchdowns. Wide receiver Otis Taylor provided the team with a great deep threat by recording 58 receptions of 1,297 yards and 8 touchdowns. And tight end Fred Arbanas, who had 22 catches for 305 yards and 4 touchdowns, was one of 6 Chiefs offensive players who were named to the All-AFL team.
The Chiefs also had a strong defense, with All-AFL players Jerry Mays and Buck Buchanan anchoring their line. Linebacker Bobby Bell, who was also named to the All-AFL team, was great at run stopping and pass coverage. But the strongest part of their defense was their secondary, led by All-AFL safeties Johnny Robinson and Bobby Hunt, who each recorded 10 interceptions, and defensive back Fred Williamson, who recorded 4. Their Head Coach was Hank Stram.
Green Bay Packers
The Packers were an NFL dynasty after being a losing team eight years earlier. The team had posted an NFL-worst 1-10-1 record before legendary head coach Vince Lombardi was hired in 1959. But Lombardi was determined to build a winning team. During the offseason, he signed Fred "Fuzzy" Thurston, who had been cut from 3 other teams but ended up becoming an All-Pro left guard for Green Bay. Lombardi also made a big trade with the Cleveland Browns that brought 3 players to the team who would become cornerstones of the defense: linemen Henry Jordan, Willie Davis and Bill Quinlan.
Lombardi's hard work paid off, and the Packers improved to a 7-5 regular season record in 1959. Then, they surprised the league during the following year by making it all the way to the NFL Championship Game. Although the Packers lost the game, 17-13, to the Philadelphia Eagles, they had sent a clear message that they were no longer losers. Green Bay went on to win NFL Championships in 1961, 1962, 1965, and 1966.
Packers veteran quarterback Bart Starr was the top-rated quarterback in the NFL for 1966, and won the NFL Most Valuable Player Award, completing 156 out of 251 (62.2 percent) passes for 2,257 yards, 14 touchdowns, and only 3 interceptions. His top targets were wide receivers Boyd Dowler and Carroll Dale, who combined for 63 receptions for 1,336 yards. Fullback Jim Taylor was the team's top rusher with 705 yards, and also caught 41 passes for 331 yards. (Before the season, Taylor had informed the team that instead of returning to the Packers in 1967, he would become a free agent and sign with the expansion New Orleans Saints. Lombardi, infuriated at what he considered to be Taylor's disloyalty, refused to speak to Taylor the entire season.) The team's starting halfback, Paul Hornung, was injured early in the season, but running back Elijah Pitts did a good job as a replacement, gaining 857 combined rushing and receiving yards. And the Packers offensive line was also big reason for the team's success, led by All-Pro guards Jerry Kramer and Thurston, along with Forrest Gregg.
Green Bay also had a superb defense, which displayed its talent on the final drive of the NFL Championship Game, stopping the Dallas Cowboys on 4 consecutive plays starting on the Packers 2-yard line to win the game. Lionel Aldridge had replaced Quinlan, but Jordan and Davis still anchored the defensive line, linebacker Ray Nitschke excelled at run stopping and pass coverage, while the secondary was led by defensive backs Herb Adderley and Willie Wood. Wood was another example of how Lombardi found talent in players that nobody else could see. Wood had been a quarterback in college and was not drafted by an NFL team. When Wood joined the Packers in 1960, he was converted to a free safety and he went on to make the All-Pro team 9 times in his 12 year career.
Posted by SemperFidelisNoah at 11:41 AM