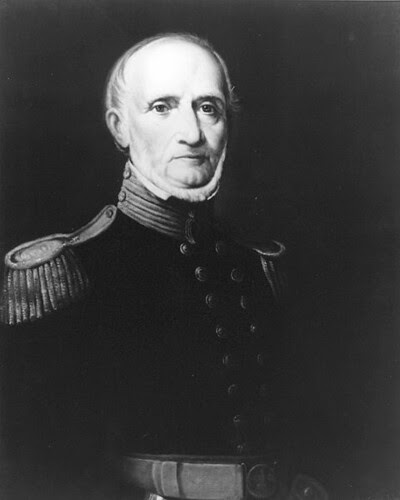 Archibald Henderson (January 21, 1783 - January 6, 1859) was the longest-serving Commandant of the Marine Corps, serving from 1820 to 1859. He is often referred to as the "Grand old man of the Marine Corps," serving in the United States Marine Corps for 53 years.
Biography
Born in Colchester, Fairfax County, Virginia, Henderson was commissioned in the Marine Corps on June 4, 1806. He served aboard USS Constitution during her famous victories in the War of 1812. He participated in several shipboard engagements and was decorated for bravery.
***
From September 16, 1818 to March 2, 1819, Henderson was the acting Commandant. On October 17, 1820, at the age of 37, LtCol Henderson was appointed as the Commandant of the Marine Corps. He served in this position for a little over 38 years - the longest of any officer to hold that position.
***
Henderson is credited with thwarting attempts by President Andrew Jackson to combine the Marine Corps with the Army in 1829. Instead, Congress passed the Act for the Better Organization of the Marine Corps in 1834, ensuring the Marines would remain part of the United States Department of the Navy.
***
He went into the field as Commandant during the Indian campaigns in Florida and Georgia during 1836 and 1837, and was promoted brevet brigadier general for his actions in these campaigns. Tradition holds that he pinned a note to his door that read, "Gone to Florida to fight the Indians. Will be back when the war is over."
***
Marines also fought during the Mexican-American War during his tenure as Commandant. The sword presented to Henderson upon completion of the action was inscribed with the words, "From the Halls of Montezuma, to the Shores of Tripoli" giving the opening words to the Marines' hymn.
***
General Henderson died suddenly on January 6, 1859. He is buried in the Congressional Cemetery. According to Marine lore, the Colonel Commandant had attempted to will his home - actually government-provided quarters in which he had lived for 38 years - to his heirs, having forgotten that they were government owned.
USS Henderson (AP-1), and Henderson Hall Barracks were named for him.

Posted by SemperFidelisNoah at 9:43 AM