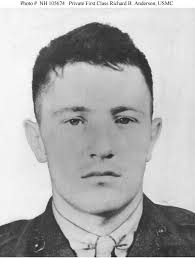 Richard B. Anderson
US Marine Corps
Medal of Honor
Richard Beatty Anderson (June 26, 1921 - February 1, 1944) was a United States Marine who sacrificed his life during World War II and received the Medal of Honor posthumously for his heroism.
Biography
Anderson was born in Tacoma, Washington on June 26, 1921 and was raised in Agnew, Washington. He attended Macleay School in Agnew before graduating from Sequim High School in the nearby city of Sequim. He entered the Marine Corps on July 6, 1942 in Oakland, California, receiving his recruit training at the Marine Corps Recruit Depot San Diego, California. Private Anderson then joined the Marine Barracks, Naval Receiving Station in San Diego in October 1942. Promoted to private first class on April 12, 1943, he was ordered to the Infantry Battalion, Training Center, Camp Elliott, San Diego, shortly afterwards.
He next joined his last unit, Company E, 2nd Battalion, 23rd Marines, and with his unit he departed from the United States in January 1944. The following month he landed in the Marshall Islands, on Roi Island. Roi Island was the first pre-war Japanese territory to fall to Marines.
PFC Anderson, a member of the invasion force, was hunting enemy snipers. He hurled himself on a live grenade in a shell hole to save the lives of three buddies though he knew death for himself was almost certain. Anderson was evacuated to a ship, where he died of his wounds on February 1, 1944. He was buried at sea with full military honors.
He was posthumously awarded the Medal of Honor "the nation's highest military decoration" and the Purple Heart.
Medal of Honor citation
The President of the United States takes pride in presenting the MEDAL OF HONOR posthumously to
PRIVATE FIRST CLASS RICHARD B. ANDERSONUNITED STATES MARINE CORPS
for service as set forth in the following CITATION:
For conspicuous gallantry and intrepidity at the risk of his life above and beyond the call of duty while serving with the Fourth Marine Division during action against enemy Japanese forces on Roi Island, Kwajalein Atoll, Marshall Islands, February 1, 1944. Entering a shell crater occupied by three other Marines, Private First Class Anderson was preparing to throw a grenade at an enemy position when it slipped from his hands and rolled toward the men at the bottom of the hole. With insufficient time to retrieve the armed weapon and throw it, Private First Class Anderson fearlessly chose to sacrifice himself and save his companions by hurling his body upon the grenade and taking the full impact of the explosion. His personal valor and exceptional spirit of loyalty in the face of almost certain death were in keeping with the highest traditions of the United States Naval Service. He gallantly gave his life for his country.
/S/ FRANKLIN D. ROOSEVELT
Posthumous honors
In 1945, the United States Navy destroyer USS Richard B. Anderson (DD-786) was named in honor of Medal of Honor recipient Anderson. The Port Angeles Federal Building was renamed the "Richard B. Anderson Federal Building" in his honor on September 2, 2008. During the renaming ceremony, a letter written by Harry Pearce was read; Pearce was one of the three men that Anderson had saved.

Posted by SemperFidelisNoah at 4:44 AM