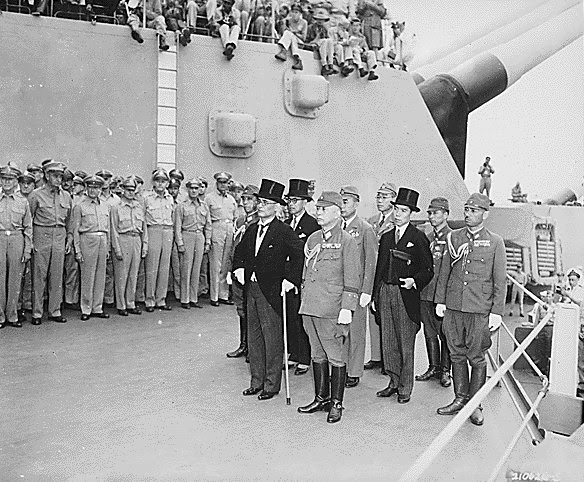 Victory over Japan Day (V-J Day, also known as Victory in the Pacific Day, or V-P Day) is a name chosen for the day on which the Surrender of Japan occurred, effectively ending World War II, and subsequent anniversaries of that event. The term has been applied to both the day on which the initial announcement of Japan's surrender was made in the afternoon of August 15, 1945 in Japan and to August 14, 1945 where it is observed as V-J Day in the United States when it was announced because of time zone differences in the Western Europe, the Americas, the Pacific Islands, and Australia and to September 2, 1945 when the formal signing of the surrender was made. The name V-J Day had been selected by the Allies after they named V-E Day for the victory in Europe.

A formal surrender ceremony was performed in Tokyo Bay, Japan aboard the battleship U.S.S. Missouri on September 2, 1945. In Japan, the day usually is known as Shuusen-kinenbi, which literally means the "memorial day for the end of the war"; the official name for the day is however "the day for mourning of war dead and praying for peace". This official name was adopted in 1982 by an ordinance issued by the Japanese government.
The day is commemorated as Liberation Day in Korea and some other nations.

Surrender
A little after noon Japan standard time on August 15, 1945, Emperor Hirohito's announcement of Japan's acceptance of the terms of the Potsdam Declaration was broadcast to the Japanese people over the radio. Earlier the same day, the Japanese government had broadcast an announcement over Radio Tokyo that "acceptance of the Potsdam Proclamation [would be] coming soon," and had advised the Allies of the surrender by sending a cable to U.S. President Harry S Truman via the Swiss diplomatic mission in Washington, D.C. On August 15 and 16 some Japanese soldiers, devastated by the surrender, committed suicide; over 100 American prisoners of war were also executed. In addition, many Australian and British prisoners of war were executed in Borneo, at both Ranau and Sandakan, by the Imperial Japanese Army.
Since the European Axis Powers had surrendered three months earlier (V-E Day), V-J Day would be the official end of World War II.
In his announcement of Japan's surrender on August 14, President Truman said that "the proclamation of V-J Day must wait upon the formal signing of the surrender terms by Japan". The formal Japanese signing of the surrender terms took place on board the battleship USS Missouri in Tokyo Bay on September 2, 1945, and at that time Truman declared September 2 to be the official V-J Day.
In Australia and most other allied nations, the name V-P Day was used from the outset. The Canberra Times of August 14, 1945 refers to VP Day celebrations, and a public holiday for VP Day was gazetted by the government in that year according to the Australian War Memorial.

Commemoration
China
September 3 is recognized as V-J Day in the People's Republic of China. As the final official surrender of Japan was accepted aboard the battleship USS Missouri in Tokyo Bay on September 2, 1945, the Kuomintang (KMT) government, which represented China on the Missouri, announced the three-day holidays to celebrate V-J Day, starting September 3. There are still "September 3" streets (in simplified Chinese: 九三街) and primary schools (in simplified Chinese: 九三小学) in almost every major city in China.

Korea
V-J Day is celebrated as "Liberation Day" in both of the Koreas since part of Japan's unconditional surrender included ending its rule over Korea.

United States
V-J Day is recognized as an official holiday only in the U.S. state of Rhode Island. The holiday's official name is "Victory Day", and it is observed on the second Monday of August. There have been several attempts in the 1980s and 1990s to eliminate or rename the holiday on the grounds that it is discriminatory. While those all failed, the state legislature did pass a resolution in 1990 "stating that Victory Day is not a day to express satisfaction in the destruction and death caused by nuclear bombs at Hiroshima and Nagasaki."
Posted by SemperFidelisNoah at 10:55 AM