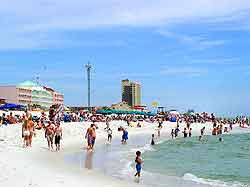 Pensacola History and Culture
Pensacola, Florida
Pensacola and the surrounding area boasts a rich historical legacy, one that begins with the earliest years of European colonization.
Of course there were Native Americans living in the area prior to the coming of the Spanish, but much of their civilization has been lost to the ravages of time.

It is known that humans lived in the Pensacola area as long as 10,000 years ago. For most of that time, their communities were small and nomadic. Through generations they developed a culture that was tied to the seashore and the trade generated by access to Gulf.
Until the purchase of this land, by the U.S. in 1819, it was a "no man's land" for runaway slaves and Indians.
By A.D. 1300 or so, the Native American Indians of present-day Pensacola were part of a larger grouping of mound builders, who flourished until the coming of the Spanish and the diseases that would finally destroy most of the natives.
There's much disagreement and speculation over who was the first European to set foot in Pensacola... Francisco Maldonado, a member of the Hernando de Soto expedition, is known to have explored the Gulf Coast and is thought to have landed in Pensacola Bay.
But without a doubt the most celebrated and remembered of early Spanish explorers of the area is Don Tristán de Luna y Arellano. De Luna led an ambitious expedition that intended to settle the Florida coast and establish a base of exploration and trade.
Leading 2,000 plus soldiers, farmers, metalworkers, priests, and, surprisingly, lawyers, de Luna dropped anchor in Pensacola Bay in August of 1559.
What begin in a flurry of high hopes and officious pronouncements quickly degenerated into a nightmarish ordeal. Barely had the colony landed than Pensacola was hit by a massive hurricane that destroyed all but three of de Luna's ships.
Most of the community's provisions were also lost or destroyed by the storm, and the settlement began to disintegrate. As difficult as it is for us to picture, given today's Pensacola of interstate, intercoastal waterways, and highways, in the 1550s Pensacola was as good a definition of the "middle of nowhere" as existed.
After abortive rebellions, disasterous raiding excursions and continuing starvation, the colonists were finally retrieved nearly four years after leaving Mexico.
The years following saw Spain and France contesting control of the entire Gulf Coast region. in 1698, 140 years after de Luna's comic opera attempt at a permenent settlement, Don Andres d’Arriola founded Pensacola.
In the early 1700s Spanish and French colonists formed an uneasy alliance against the British and their Indian allies during Queen Anne's War. The British burned Pensacola to the ground in 1707, the French in 1722.
Asfter that the Spanish rebuilt the town on several different locations. Control of Pensacola then shifted to England, until the American Revolution, when it was given again to Spain.
The United States finally gained possession of the city in 1821... and lost control again in 1860 when Florida seceeded from the Union and joined the Confederate States of America.
After the Civil War, Apache Chief Geronimo was held at Ft. Pickens along with some of his family and followers, before being moved to Mobile, Alabama.
As Pensacola entered the twentieth century it started a steady period of growth. Fueled in part by the building of railroads into the county and bridges connecting Pensacola with Gulf Breeze, and Gulf Breeze with Santa Rosa Island.
Throughout the 1900s the city and its adjacent areas continued to grow and develop. The city of Pensacola has become a regional business, healthcare, shopping center. Naval Air Station Pensacola has provided the city with many jobs and a community of civic-minded families who have been a tremendous resource.
Pensacola Beach, Gulf Breeze and Perdido Key have all evolved into vacation destinations of the first order. Continuing development of these areas is expected to drive a significant portion of the county's economy throughout the twenty-first century.
Pensacola, the city of Five Flags, is a history buff's dream. In Pensacola Bay the sunken wrecks of the de Luna expedition rest, on Ft. Pickens walk the ghosts of Civil War soldiers and Apache braves, and over it all hangs the legacy of the many nations and cultures which shaped the city, and its people.
Posted by SemperFidelisNoah at 1:08 PM