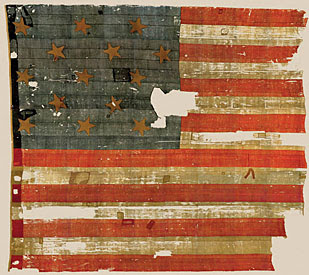 A New Constellation
The STARS AND STRIPES sustained our young nation through its five-year battle for independence. From 1781 to the ratification of our Constitution in 1788, this same flag was the one symbol of unity that bound together political leaders of persuasions so different that their philosophies threatened to be more dangerous to the survival of the Republic than the British armies. The flag embodied both prevailing thoughts on the design of the new country. The distinct representation of individual States by their own star in the field of blue attested to the the individuality of each. The Federalists approach was represented in the fact that these 13 individual states had representation in a single flag, uniting them all.

By tradition, the arrangement of the stars in the blue union is based upon the order of admission of each state. The star for each of the first 13 states is assigned on the chronological order in which they ratified the United States Constitution.

A New Star in the Constellation
Tucked into the area of the New England states was a small, independent republic called Vermont. The territorial rights of the republic were somewhat in dispute. In 1749 New Hampshire governor Benning Wentworth had granted an area for establishment of the town of Bennington. The surrounding area became known in 1763 as VERD-MONT, a word meaning "green mountain". The name was unofficial however. Colonial leaders were still in disagreement over Governor Wentworth's right of grant, with New York claiming ownership to much of the area. A year later by royal order, the area west of the Connecticut River and from the north boundary of Massachusetts was annexed to New York.
Most of the colonies refused to become involved in the ownership issues contested by New York and New Hampshire. Seven months later, on January 15, 1777 the people of the disputed territory declared themselves to be the free, independent republic of New Connecticut. The effort was quickly denounced by New York and subsequently rejected by Congress. Lacking acceptance by the Continental Congress, six months later the stubborn citizens of New Connecticut established their own constitution providing for a governor and a general assembly, and re-named their republic "Vermont". The constitution of Vermont included a ban on slavery, the first such action in the American colonial region.
***
Vermont's Green Mountain Boys established a reputation as fierce defenders of independence during the Revolutionary War. You have seen the Bennington flag that was reportedly flown during the Battle of Bennington, Vermont. But the republic of Vermont was not represented by a star on that flag or the opportunity to ratify the United States Constitution years later. Though many of Vermont's 80,000 residents desired union with the 13 United States they had courageously defended during the Revolution, their defiance of New York's claims to ownership left them ostracized. By 1783 the dispute had reached such magnitude that George Washington reported to Congress that Vermont might have to be subdued by armed invasion. The stalemate was finally broken by Vermont's payment of $30,000 dollars to New York for the lands in question, and on March 4, 1791 Vermont became our 14th state.
***
A year before the American Revolution, a rugged frontiersman named Daniel Boone blazed a trail called the Wilderness Road into western regions claimed by Virginia and ultimately named Kentucky. During the Revolutionary War the British successfully pitted the native Indians against the increasing population of white settlers in Kentucky. Boone himself was named a captain of militia and fought both the British and Indians during the war. War with Kentucky's Indian population continued on after the British departed, however.
In 1781 and again in 1787, Daniel Boone represented the "county of Kentucky" in the Virginia Legislature. Following the Battle of Blue Licks in 1782, Indian resistance was broken. With a new sense of safety, thousands of white settlers, including large numbers of Revolutionary War veterans, flooded the area. By 1790 the population of Kentucky reached 74,000.
Many of the settlers who made their home in Kentucky, saw in the new region the potential for a whole new nation. Others, with their strong allegiance to Virginia, urged maintaining the county as a holding of that state. Debate on Kentucky's status began in earnest in 1786 and continued for eight years. Finally, on June 5, 1792 the issue was resolved when the Commonwealth of Kentucky became the 15th United State of America.
The Star Spangled Banner
In January of 1794 the United States Congress adopted a resolution to alter the flag to represent the Nation's two new states. At first glance the flag that would become our official standard for a quarter-century differed little from the first Navy Stars and Stripes. It is only on closer examination that one realizes that not only was the number of stars increased, but the number of red and white stripes was increased as well. Indeed, from 1794 until 1818, the flag of the United States consisted of FIFTEEN stripes (8 red and 7 white), with fifteen white stars in the union of blue.
***
It was just such a flag that was the first United States flag to fly over a fortress of the "Old World" when, on April 27, 1805, US Marines raised it above the pirate stronghold in Tripoli. It was this flag that was the ensign of the American forces in the Battle of Lake Erie in 1813, and General Andrew Jackson flew this flag in 1815 at the infamous "Battle of New Orleans". Here (at left) it is seen flying from the mast of "Old Ironsides" during the War of 1812.

Baltimore's Mary Pickersgill, who had made flags of the 13-star variety during the Revolutionary War, completed one such flag and delivered it to Fort McHenry on August 19, 1813. The flag itself measured 42 feet long and was 30 feet high, each stripe a full 24" in width. The fifteen stars each measured two feet from point to point. Years later Mary's daughter wrote that the flag "contained four hundred yards of bunting, and my mother worked many nights until twelve o'clock to complete it in a given time." For her services Mrs. Pickersgill was paid $405.90.
Thirteen months later, as Washington, D.C. lay in ruin from invading British Soldiers, Mrs. Pickergill's huge flag was flying over Fort McHenry as the enemy moved their attack towards Baltimore. At sea and a prisoner aboard an enemy ship, a young attorney watched throughout the night as the brave defenders at Fort McHenry repulsed the British Navy. As dawn broke he strained his eyes against the horizon to see if his countrymen had survived. The bright 24 inch stars and 42 foot long stripes were hard to miss. As his heart swelled with relief at the sight, the young attorney wrote a poem on the back of a crumpled envelope. Francis Scott Key's poem was titled "The Star Spangled Banner". As a result the flag of 15 stars and 15 stripes gained a new name. Mary Pickergill's original STAR SPANGLED BANNER has undergone extensive repair and restoration since 1814, and can be seen at the Smithsonian Museum in Washington, D.C.
Posted by SemperFidelisNoah at 12:30 PM