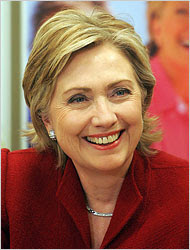 We need to know the players
(Stupid me! I recently purchased a three-year subscription for Gulf Breeze News newspaper in Gulf Breeze, Fla. I sent this piece to the Editor/Publisher, Gulf Breeze News - Letters to Editor section, requesting publication. It did not receive the red carpet treatment. It's not my nature to be stopped by this weekly newspaper and now I will publisher it myself so the world can read it through my World Wide Web.)

Republican candidates for Presidential nomination for 2008:
Sen. Samuel D. "Sam" Brownback, Kansas; Former New York City Mayor Rudolph W. "Rudy" Giuliani, New York; Former Governor Michael D. "Mike" Huchabee, Arkansas; US Congressman Duncan L. Hunter, California; US Senator John S. McCain III, Arizona; US Congressman Ron Paul, Texas; Former Governor W. Mitt Romney, Massachusetts; US Congressman Thomas G. "Tom" Tancredo, Colorado; Former Tennessee US Senator Fred Dalton Thompson, Virginia.
Democratic candidates for Presidential nomination for 2008:
US Senator Joe Biden, Delaware; US Senator Hillary Rodham Clinton, New York; US Senator Christopher Dodd, Connecticut; Former US Senator John Edwards, North Carolina; Former US Senator Mike Gravel, Alaska; US Congressman Dennis Kucinich, Ohio; US Senator Barack Obama, Illinois; Governor Bill Richardson, New Mexico.
All of the above candidates are great Americans with leadership ability and any one of them would be better than George W. Bush. Some are conservatives and some are liberals. Yes, some are "Liberal Democrats." I hear some birdbrains referring to democrat as liberal democrat, when the same person was once one of them a few years back. I refer to him as a turncoat, a person that is untrustworthy.
Do you think you are better off today than what your were when the United States Supreme Court appointed Bush president? Do you think Iraq would have been invaded if Al Gore was president? Wouldn't it be great if 3,780 Americans killed in Iraq would still be living. And the 27, 848 Americans who have been wounded - many with no arms, legs and eye sight would still be healthy? This would not have happened if Gore was president.
President Bill Clinton left Bush with a balanced budget, tons of surplus money and no war. It required Bush only a very short time to blow it and wrongly invade Iraq.
After I viewed the past records of the Republican candidates, they are far behind the candidates in the Democratic Party. I have always been a registered democrat and that will never change. Even though I am pleased to be considered a Liberal Democrat, I have voted many times for Republicans in the past. For those of you who don't like the democrats, give back all your benefits that you are receiving. The average American would be in deep trouble if it was not for the Democratic Party.
Conclusion: My vote is for Senator Clinton and I have asked her to select a General as her Vice President. His name is Wesley Clark, General, US Army, Retired. The 4-star General was NATO commander when he retired, and he ran unsuccessfully for President of the United States four years ago.
It will not be easy for President Hillary Clinton and Vice President Wesley Clark, when they take over on Jan. 20, 2009. Bush will hand them the baton and tell them to find a way to get out of Iraq. It sad for the American people that we will not have a Commander in Chief of the American Armed Forces for the next 15 months, but what else is new? We have not had one in the last seven years.
Posted by SemperFidelisNoah at 6:10 PM